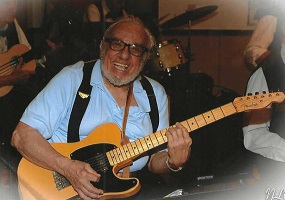 Richard “Dick” Stephen Belli, 88, of Southborough passed away on October 6th, 2022. Born in Framingham, he was the son of the late Stephen & Josephine (Sannicandro) Belli.

Dick grew up with his sister, Ginger, & his beloved Nona, Ardovina Belli, in Framingham. He graduated from Framingham High School with vocational training in 1952, and then served in the National Guard. To his great pride, he worked as a tool & dye maker for Hardric laboratories, making beryllium components for the space shuttles. He spent the remainder of his career working for Becton Dickinson.

In retirement, he played as a singer, harmonicist, & guitarist in many local Senior Center band performances. A fierce animal lover and advocate, he cared for many cats & rabbits, adopted from the local shelter. Dick showed his affection for his family by cooking them delicious Italian food. He gave big hugs, talked loudly, & joyfully belted along to his favorite songs.

Family and friends will honor and remember Dick’s life by celebrating his Funeral Mass on Friday morning, October 14th in Sacred Heart of Jesus Church, 5 E Main St. Milford, at 10 o’clock. Interment will be private.

In lieu of flowers, remembrances may be made in Dick’s name to: “The Blair House of Milford Resident Council Fund”, 20 Claflin St. Milford, MA 01757.