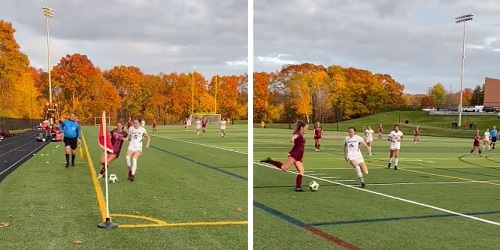 Above: Titans Girls Soccer had some exciting moments this week, but didn’t cinch the CMass title. But they’re still in the running for state champs. (images cropped from videos tweeted by @ARHSAthletics)

Three Algonquin girls teams are entering the MIAA state Division 1 playoffs. All three of the Titans teams earned a Bye for the Preliminary Round. They will start in the Round of 32 against teams they haven’t yet faced this year.

Up first is Girls Volleyball (who should be riding a high from their recent CMADA playoff win). Details have been posted for the 14th seed Titans to host 19th seed Wellesley at 6:00 pm tonight.

Although ARHS Field Hockey lost twice as many games as it won, they still earned 21st seed out of 34 teams. On Friday, they’ll travel to challenge 12th seed Needham at 5:00 pm.

Girls Soccer didn’t win the Central Mass title on Tuesday. They fell to Grafton 0-1 in the tourney Finals. While they can no longer call themselves undefeated, they still have a chance at state glory. (Especially since the only team that beat them this fall will be competing in a different division.)

The Titans were seeded 4th in the D1 state tourney. On Monday, they’ll host either 29th seed Peabody or 36th seed Durfee (who are set to face off on Saturday).

Football will only be playing in non-playoff games this month. Meanwhile, their Cheerleaders will vie for the league title this Sunday.