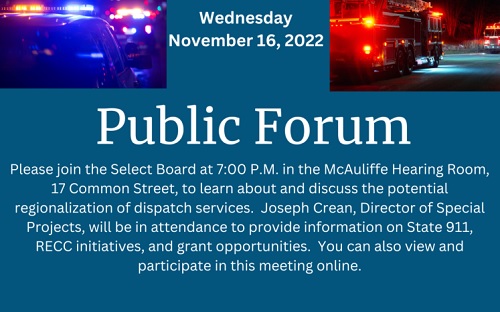 Above: The public is invited to “learn about and discuss” the potential for replacing Southborough’s dispatch service with a shared regional service.

Last fall, the Town entered into a study for the potential regionalization of our public safety dispatch services. Next week, the Select Board is hosting a public forum to discuss what they learned and potential next steps.

The Town issued the following invitation:

Please join the Select Board at 7:00 P.M. in the McAuliffe Hearing Room, 17 Common Street, to learn about and discuss the potential regionalization of dispatch services. Joseph Crean, Director of Special Projects, will be in attendance to provide information on State 911, RECC initiatives, and grant opportunities. You can also view and participate in this meeting online.

Based on the public feedback at the Board’s last public discussion on the topic, expect at least some of the participants to be in opposition to the proposal.

At their September 20th meeting, the Board discussed the report they received on the potential for a regional center with Westborough, Grafton, Hopkinton, Marlborough, and Hudson.

The Board learned that Marlborough, Northborough and Hudson had withdrawn their consideration. Chief Stephen Achilles noted that staffing and modeling data in the study would have to be adjusted to reflect the smaller group.

The remaining Towns had been asked to give a “soft approval” to continue to the next stage of the process.

Achilles advocated that if we don’t regionalize, the Town needs to make a significant investment in our own dispatch to addresses gaps identified in the dispatch study. He also pushed that if the Town is going to regionalize, we should be pursuing joining something earlier rather than later. He argued that pushing it out would almost diminish the benefits.

He followed that grant funding will open in January and close in the spring. If we miss the window, we’ll need to wait an additional year.

Chair Kathy Cook expressed interest in the possibility of joining a regional dispatch service in Foxborough. Achilles opposed the idea. He said that he didn’t see an advantage and believed that working with local mutual aid partners made more sense.

One advantage reference for having a local center was the idea that current dispatchers would be more likely to join the new center.

The Board was concerned that a regional service may not be as attractive, with only four partners, or less if other Towns withdraw. But they agreed that they were interested in continuing to explore the opportunity.

That night the Board heard from some angry and frustrated residents and public safety personnel upset about the potential change. Among the concerns was the possibility that no staff would be onsite in the lobby for members of the public who show up in person with an emergency or issue.

How towns would handle drop-ins from the public is an issue that has come up throughout the process. Achilles has stated that it’s up to each town to decide and different towns take different approaches.

They also heard from Kyle Devincent, representing the dispatcher’s union. He criticized the board for a process that didn’t involve the staff and for ignoring his invitation to see the services that Southborough’s dispatchers provide. He followed by pitching the importance of local dispatchers in the station. [Editor’s Note: I received a Letter to the Editor on this topic from Devincent this afternoon. I’ll be posting that tomorrow.]

Following the comments, Vice Chair Chelsea Malinowski (who has been representing the Board on the initiative) responded to some of the concerns she heard. She stressed that the decision they were making that night wouldn’t “put our station dark”. She noted that one possibility was having an officer work the desk overnight.

She then stressed that pursuing regionalization wasn’t about cost for her, though it factors into it. She stressed that dispatchers need to be provided the resources they need to do the best job they can. Throughout the process, Achilles and Board members discussed the benefits of having multiple dispatchers better able to handle multiple emergency calls coming in at the same time.

Earlier in the discussion, the Board noted that public outreach would be an important part of the process.

Again we have a situation where well meaning folks are trying to fix something that is not broken! Time and time again we seem to lose realization that what we now have with our great public safety facility is and will always perform great! Great credit goes to all the first responders who dedicate their lives to serve us! Every instance where towns have tried regional dispatching has proven to be a disaster and once the change is made there is no coming back! That’s a proven fact! I was very happy that the town had the foresight to promote within with the new Police Chief! Every officer I spoke with was very happy as well. My wife Debbie grew up in Southborough and we have been residing in town for 40 years and have always had great support from first responders. Also given to high property tax rate in town and soon to go up again we must funnel funds to the police and fire to upgrade any systems they require! In the past years multitude amounts of funds have wasted on project studies that never come to finished projects! Time to direct our hard earned dollars to the folks who dedicate their lives to protect and serve us. In closing one of my closest friends is a retired firefighter in the town of Marlborough and served foe 40 years and from all his experience has said regional dispatch is a huge mistake. Thanks Mike Pojani!