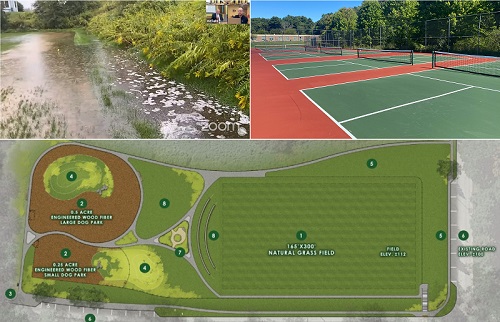 Above: An update on the status of Town Recreation projects past and future. (images cropped from Recreation presentations and materials, plus a contributed photo)

Given voters’ past grave concerns over the viability of the Kallander Field project, I’m sharing an update on the project’s success.

While I’m at it, I’m including other Town Recreation updates — including the Pickleball Courts.

My highlights below include details from the update Recreation Director Tim Davis made to the Select Board last week. But I’m also providing context I’m aware of from past public meetings and my own communications with Rec.

Kallander Field will be Ready for Spring Play

For years, the athletic field on Kallander Drive has been plagued by drainage issues that contributed to the deterioration of the field. The condition became so poor, that members of Southborough Youth Soccer argued it was too dangerous to continue using.

Recreation argued that the Town needs more playing fields and that lack of fields leads to overuse, accelerating their deterioration. The Commission was looking to invest in having enough fields to rotate resting some for better long term maintenance.

In 2018, the Recreation Commission and some residents made impassioned pleas for voters to approve a $267,400 design and construction project to fix the problems. Annual Town Meeting voters rejected the ask. Hoping to have better answers to voter concerns (and get a bigger turnout of supportive soccer parents) Recreation tried and failed again at a Special Town Meeting later that spring.

At the Town Meetings, residents and officials raised worried about wasting money on a problem that couldn’t properly be fixed. The field sits down a cliff, and collects its runoff, from the Carriage Hill development. There were claims that the development’s owners association was mishandling their drainage systems and were responsible for fixing it. That was disputed by the association and some representatives of Recreation and Public Works.

The issue was also raised that the field was created to act as a drainage basin for the surrounding area. (That was essentially confirmed by Davis in his update to the Board last week.) However, Rec’s consultants had assured them that a properly installed drainage system would fix the issues to allow a playing field in the middle.

In 2019, Rec succeeded in convincing voters to approve a revised project at a much lower cost. A phased $19,200 Feasibility Study was approved with a requirement Select Board’s approval to continue to phases 2 and 3.

Once the Feasibility Study better demonstrated proof of concept, a $238,750 Community Preservation Act construction project was approved by voters in 2021 without controversy.

In Davis’ November 1st update to the Select Board, he shared that in the midst of construction, contractors discovered old drainage equipment installed in the swale that weren’t in any of the plans that had been submitted to the Town. According to Davis, the pipes “had no pitch”. That meant that when the drains filled, pipes backed up and overflowed. The Town decided that rather than trying to fix it, they would dig it out and install the newly designed system.

After the new system was installed (but landscaping work not complete) this summer, Davis visited the field on September 6th after the Town was deluged with 2-3 inches of rain over two days. He was alarmed to discover rushing streams of water, which he documented. (See the video he shared below.)

When Davis contacted the contractor, he was told the flowing stream was proof the system was working correctly. The contractor urged him to return the next day to see. Davis showed the Select Board photos (right) he took less than 20 hours after he took the video. He described that the middle of the field was already dry the morning of September 7th.

According to Davis, the contractors have since installed stones to improve the drainage and are still overseeing the project to finish establishing the grass. (See photos below.)

Davis projects the field will be open for play in the spring. In more good news, Davis said the project came in under budget.

The Rec Director confirmed to the Select Board that the Commission now needs to discuss rotating the resting of fields.

Another CPA project approved by voters was the restoration of the Tennis Courts at Finn School. Both courts were in bad condition, but especially the court that had been used for years as a Skate Park.

The wooden ramps had deteriorated and were unsafe for continued use. After soliciting public feedback, and based on the growing popularity of another sport, rather than replacing the ramps, the Rec Commission decided to invest in building pickleball courts.

The Richardson Tennis Courts at Neary School already included some lines painted to allow pickleball play. That is also the case for one of the tennis courts at Finn. But the other Finn court was converted to create four standing pickleball courts. (See before and after pics below.)

Davis also reminded the Board that earlier this year, the projects to add lights to Mooney Field and the Richardson Courts. Select Board member Lisa Braccio asked about a complaint she heard that sometimes people drive by and see lights on at night with no one playing.

Davis said that the Richardson Courts switch is on a 30 minute timer. As for baseball, he said that Recreation is able to schedule the lights to be on from their office based on the permits for the teams that registered to use them. If an organization doesn’t update Rec when they cancel a practice or game, then the lights will still go on. He noted that the cost is covered by the team that booked the field.

Field Projects on the Horizon

This spring, Town Meeting voters will be asked to consider using CPA Funds to support a recreation project outside of Town. The Regional School Committee is pursuing a project to refresh and improve Algonquin’s “aging & out of compliance” high school athletic facilities.

Southborough Recreation isn’t expected to bring any of its future projects to voters in 2023. But they are looking further down the road at potential projects. Here’s what they have brewing. . .

Following up on the results of a Feasibility Study for Lundblad Field on Parkerville Road, the Commission has been discussing pursuing building a multi-purpose athletic field. Since the site is a former landfill, projects would need to protect the membrane that contains the old fill.

Given the grade of the southern section of the parcel, the Commission believes that area would be best used for a different purpose then athletic fields. They are looking at building a feature they have heard past community support for — dog parks. To meet another community need, they would also build ADA compliant walking paths around the parks and field.

The Commission is also interested in creating another full size (11 v 11) turf field, like 9/11 field. They are eying the fields in front of Woodward School for the site. Davis noted that they would be able to take advantage of the lights previously installed there.