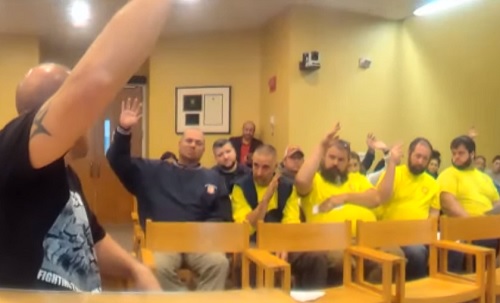 Above: Southborough employees signaled that they believed they contracted Covid through their in-person work for the Town. (image cropped from meeting video)

The Select Board voted against using any of the $3M the Town is eligible for in ARPA funds as hazard pay for Southborough Town employees whose jobs put them at elevated risk at the start of the pandemic.

The Board had appointed an ARPA Committee to make recommendations for how to best use the federal funds. The Committee recommended that about 10% of the money be used for eligible staff that worked in person in the spring of 2020. Designated full-time employees would receive $5,000 and part-time $1,000.

On Tuesday night, the Board followed up on their November 1st discussion on the recommendation. Although, the agenda referred only to a request by Police and Fire departments, the Board was reminded that the Committee’s recommendation covered other Town employees including members of Facilities and the DPW.

In the discussion two weeks ago, Board members had stressed their concern that some staff would feel they were treated unfairly if excluded from a select list of employees given extra pay. After hearing from public safety officials making their case about the impact of Covid on them and their families, member Sam Stivers asked for extra time to consider if there was a better way to deal with the issue.

Between meetings, it was a different member who came up with an alternative solution. But in the end, it wasn’t supported.

Prior to the vote, Stivers said he still couldn’t find a way to be fair to all Town staff, so didn’t support the spend. While Chair Kathy Cook and member Andrew Dennington maintained their stance against the spend, Lisa Braccio told them that she had changed her position.

Braccio received many calls between the meetings from people advocating for the pay and others pushing for greater tax relief. After more research into staff who worked in-person in March-December of 2020, she came up with a list of 53 full-time and 5 on call employees. She and others noted that ARPA regulations prohibit spending the funds on school staff and Teachers — a group who members had lamented the spend would unfairly exclude.

Braccio tried to persuade the Board to support a modified request that would reduce the special pay for full time staff to $2,000. That would still allow the Board to increase the amount allocated to Tax Relief. She followed that if they disagreed, she would vote with them. She stressed that the decision should be unanimous among the four voting members.*

Stivers questioned whether Braccio could be certain about her list. She acknowledged that no list could eliminate all possible complaints.

During comments from the public, ARPA Committee Chair Andrea Hamilton explained that the Committee had found a list of Town employees (similar to Braccio’s but slightly larger) that the recommendation was based on. The $300K would cover all of them. She reiterated that their recommendation wasn’t exclusive to Police and Fire.

Resident and Vice President of the Police Union Heath Widdis told the Board that every day of going into work in the opening months of the pandemic was painful. He reminded them of images on the TV of bodies in NY under blankets while officials struggled to determine what to do with them. He asked the room of workers who showed up in support of the spend to raise their hands if they had feared getting infected, been infected, and believed the infection was through exposure at work. Several did.

Lt. Neal Aspesi of the Fire Department told the Board that he had followed up on concerns they mentioned in the prior meeting. He reached out to groups of workers that the Board had indicated might be upset. He described conversations with other departments that were supportive of the request. (Some believed they were also eligible and others knew that they would not be.)

Prior to allowing comments, Board members assured eligible employees that they appreciated their service. But following the comments, members voted unanimously against the recommendation without responding to any of the arguments raised. Afterwards, Cook told those in attendance, “we did what we think was right thing to do for this particular item”.

Since May, the Board has approved many of the Committee’s recommendations, while others have been on hold for more details to be worked out. This was the Board’s first vote to reject one. (You can see my updated spreadsheet tracking the Board’s decisions for allocating the funds here.) The motion didn’t designate an alternate use for the funds.

*Vice Chair Chelsea Malinowski absented herself from the discussion based on being married to a firefighter (although he works for another town).

Again we have short sighted individuals deny financial assistance to those who went above and beyond to insure the continued service and safety of town folks and sacrificing their family time together. when are you people gonna wake up and support those who continually insure our safety and wellbeing. I am totally disgusted with this awful decision as are many other folks. All town boards and committees met remotely throughout the pandemic. Not our first responders!!!