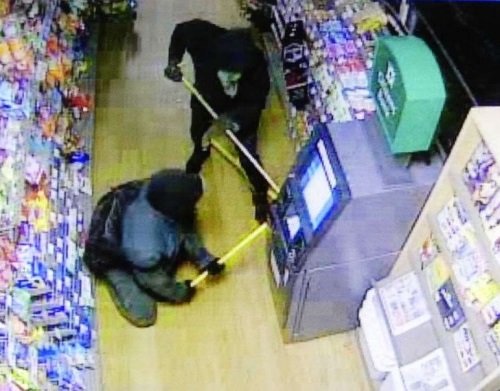 Above: The SPD released an image from Cumberland Farm’s security video capturing an attempt to break into an ATM. (cropped from press release)

The Southborough Police are investigating an overnight break-in at Cumberland Farms. They are asking anyone with information to contact them.

On Monday, 11/28/22 at approx. 0350 hrs, Southborough Police received a 911 call from an employee of the Cumberland Farms store located at 365 Turnpike Road, reporting that a break-in had occurred overnight at the store. The employee reported that it appeared the ATM had also been tampered with. After reviewing security footage from the business, it appears that two masked individuals entered the building at approx. 0242 hrs. after using a crowbar to smash through a glass pane of the front door of the business. They attempted to break into the ATM, but were unable to do so. Both individuals fled the store on foot after being unable to enter the ATM. The Detective division is currently investigating the break-in, and anyone with any information is asked to contact Det. Steve Neivert at (508) 485-2121 or sneivert@southboroughma.com. Thank you.