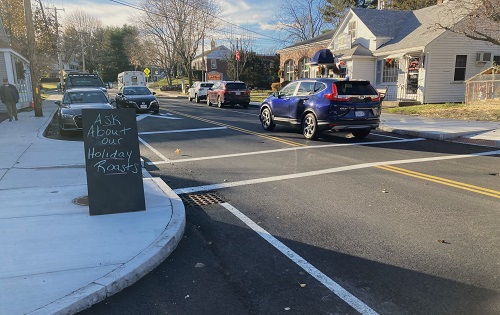 Above: The final section of downtown was recently repaved. But the process and final results upset some of the business owners on that stretch of Route 30. (photo by Beth Melo)

This month, owners of downtown Southborough businesses owners vented their frustration to Town officials. It appears that changes to the downtown layout have some of them concerned. And disruptions to their pre-Thanksgiving business added fuel to the discontent.

Last week, Select Board Chair Kathy Cook recapped for the Board a meeting she had with businesses and the Police and Fire chiefs on December 2nd. According to Cook, business owners that attended the meeting “were very pleasant, but very pointed in their remarks”.

Cook’s impression was that many of the issues were rooted in insufficient communication between Town employees and the businesses that make up Southborough’s Downtown Business Village.

One topic that owners raised was safety concerns they have about redesigned sidewalks and curb cuts. But first, they aired their grievances over construction and detours that impacted what is normally a busy day downtown.

I spoke up with Cook to make sure I understood some of the details that were difficult to hear in the video of the meeting. The Chair updated that she met with Public Works Superintendent Karen Galligan today about the issues.

Cook said owners were “flabbergasted” that no one consulted them over the timing of the final paving of downtown streets.

The paving of multiple roads with several detours took place on Novemer 23rd, the day before Thanksgiving. It’s a day that would normally be very busy for some of the small businesses.

When many drivers would be fueling up to travel, there was no access to the gas station Falconi’s Pit Stop. That section of Route 30/Boston Road was closed off with drivers detoured around it.

Around the corner, there was access to Southborough businesses on Main Street. But with paving in progress and detours all around the area, many drivers likely avoided the area.

Among the impacted were Mauro’s Village Café (which sells pies for Thanksgiving) and Saxony Barbershop II (which had clients who reportedly complained about not being able to get to appointments).

Responding to the issue, Town Administrator Mark Purple told the board getting the paver out as the end of paving season is challenging.  He indicated that the paver sets the schedule. He followed that he has been communicating a lot with one of the owners over the past few months and the Town has tried to be “as responsive as we can”.

Cook said that she apologized to the owners. She stressed noted that there’s no way to undo what was done, just to make an effort to do a better job working with them in the future.

Cook told fellow members that it didn’t seem too much effort had been made to communicate with owners about what the final downtown design would be. They were apparently surprised by cut outs in the sidewalks limiting where cars can park on the street.

Mauro’s Café’s owner also complained that the site line for drivers turning left out of the parking lot is problematic. He claimed that drivers have to pull too far out to see that it is clear to proceed.

That was one of the complaints that Galligan disagreed with in her meeting with Cook today. She also defended that the “severe” angle of the curbs and curb cuts that owners disliked is the correct way to do them.

One area of issues is how the new construction meets up with existing private property. Cook tells me that Galligan explained an unfortunate angle in front of the the Barbershop is due to the slope of the privately owned land.

Initially, there was also a “lip” in front of Mauro’s Café where the sidewalk met the parking lot that caused an elderly patron to trip and fall. Following up on the complaint, the contractor came back out to eliminate the hazard.

The contractor also followed up to paint in lines to allow parking in front of the 1 Main Street entrance. (At the December 2nd meeting, Ginny Martins Realty had believed their street parking was eliminated.)

More finish work was already scheduled for the spring. Brick style crosswalks still need to be installed where crosswalk lines are painted. And construction of the pedestrian crossing over the railroad track is still waiting on the railroad owners. The engineering work is complete, but CSX controls the process. (The company will put the job out to bid, then bill the Town for the work.)

At Cook’s request, Galligan will visit the area to examine the complaints raised and determine if the engineering plans should be re-examined. If anything does need more engineering work, that may be resolved under the next DPW chief since Galligan’s end date is January 6th.

Below are photos I took last week of the recently reconstructed downtown business area:

Why the whole area had to be shut down during paving is a mystery to me. Paving is usually done in one lane, then the other. It keeps traffic moving. The businesses suffered because traffic was messed up, and lots just turned around. I don’t expect much of an answer from our DPW superintendent. Not her problem in a couple of weeks

I’m glad to hear that the fake brick crosswalks are on the punch list.

As a frequent downtown walker, I’ve seen the ramps to the crosswalk between Saxony II and Mauro’s as a trip hazard. Someone has made a large improvement to that by adding the small planters on either side. Was that the DPW?

I do wonder why no tree wells were planned for the big chunks of concrete sidewalk in that area. That seems like an easy beautification opportunity missed. At this point, it’s too late.

I definitely wouldn’t want the town to jackhammer up the concrete now. I didn’t see it, but it appears the other projects in downtown, the sidewalk to Reliant Medical on Newton St., put in first class concrete sidewalks which the water main project immediately had to replace with a small asphalt section for every service address.

At least those sections are flush with the concrete around them. The older Main St./30/85 project has many asphalt sections (which I had imagined were temporary and planned to be replaced with concrete after all the poles were done), and many of them are an inch lower than the concrete.

The truth is, we only do patchwork anymore, unless there’s Federal money from an economic stimulus. There are seams everywhere, beating up our suspensions, tripping us, and providing gaps for water to freeze and thaw and break down pavement prematurely. I really wonder whether the money we save on the contracts (I assume) is worth the cost of ownership. (By the way, it’s not just Southborough that does all this patching.)

That was what I forgot to mention – planters! I haven’t seen them, but I presume they are by the DPW. Cook informed me that placing large planters was something the DPW planned to do in the future.