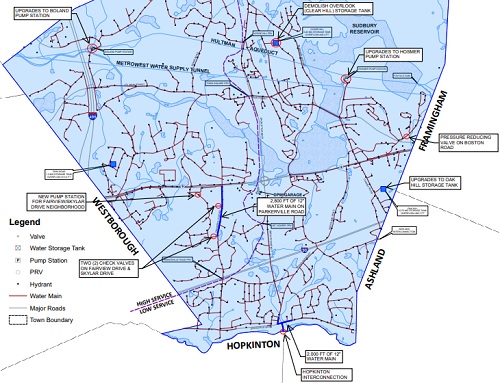 Above: Southborough and Hopkinton officials will discuss terms for further pursuing a potential joint water system project. (image from the Interconnection Evaluation report)

Back in June, I posted that Town officials were looking into a request from Hopkinton to help them resolve their water supply issues. As the Select Board pursues a letter of Intent with Hopkinton to take the next steps on the potential project, and FAQs are posted for the public, it’s time for an update.

In 2021, Hopkinton officials learned that PFAS levels were above MassDEP safety standards in several wells that support the Town’s water supply. They determined that the best course of action was to buy water from the MWRA (Massachusetts Water Resources Authority). The only feasible route is through Southborough’s water mains.

Hopkinton contracted Southborough’s Water Department engineering consultants to come up with a recommendation that could be palatable to both Towns. Hopkinton’s Town Meeting in May approved pursuing a project with our town.

In June, Hopkinton offered to share the cost of investments in Southborough water infrastructure improvements as part of the deal. Tim Thies of PARE Engineering suggested that changes would resolve some of the capital improvements Southborough would have needed to make in the next few years and fix pressure issues in some neighborhoods. But the plan came with some expense to Southborough taxpayers, to replace the Oak Hill tank with a taller one. (That last part immediately raised concerns from Oak Hill neighbors. You can read more about that here.)

At the time, the Board agreed to have the Public Works Planning Board take a closer look at the project and hold public hearings for residents to weigh in (especially on the elevated tank).

Subsequently, Select Board Chair Kathy Cook reached out to John Butler who she served on the Advisory Committee with in prior years. Butler has previously done some “deep dives” into specific Town fiscal issues. He agreed to work with DPW Director Karen Galligan to study the request.*

In September, Butler gave a detailed report to the Select Board. The bottom line was he didn’t believe the project was worth pursuing for the Town’s capital needs alone. He did think it may be feasible if we want to be good neighbors to a community in need.

The project appears to take care of some capital improvements to Southborough’s water system that PARE had previously recommended as necessary in the next 10 years. But no Town officials believed it likely that investments would be made the next few years if it wasn’t for this project.

As part of his presentation, Butler assured that MWRA’s water supply is plentiful enough to share far more than Hopkinton is looking for without threatening Southborough’s supply. Future water shortages that environmental experts warn about aren’t expected in our region. (In a later meeting, he explained that Climate Change is expected to exacerbate drought in areas that are already dry. Meanwhile, some wet areas are expected to receive too much rain.)

The Select Board agreed that the Town should look at whether there was a way of helping Hopkinton without hurting Southborough residents through increased costs, disruptions, etc. They asked Butler to come up with suggestions to consider including in a Letter of Intent (LOI) to propose to Hopkinton.

Initially, the Board intended to consider the LOI terms in closed Executive Session. The closed strategy session “in preparation for negotiations with the Town of Hopkinton for indirect access to MWRA water” was posted for October 18th. That alarmed some residents who perceived that the Board was approving the project without having held the promised hearings. At the public meeting that night, Cook reassured that wasn’t the case and cancelled the closed session.

The Board then held more public discussions on the matter – including a dedicated meeting on October 26th. At that meeting, the Board decided that to assuage public concerns they should post an explanation, relevant communications, and an FAQ addressing common concerns and misperceptions on the Town’s website. Most of the relevant documents were posted a few weeks later. (The FAQs were just added recently.) You can find all of that here.

On November 21st, Butler returned to the Select Board to provide feedback for the LOI. In that meeting, Galligan explained that there were 6 top priorities in the Master Plan related to the Water System. The project to replace Newton Street water mains was just completed, leaving 5. The proposed plan would switch Southborough from one water zone to two. That would resolve three more of the priorities:

The Select Board agreed that they wanted to get better information about what roads would be impacted by the project. But given the likely need to bring something to Annual Town Meeting in March, they wanted to move forward on proposing terms for an LOI.

All Board members agreed that given the inconvenience the construction project will create for residents, Hopkinton should pay for the full cost of the project.

One of the items they are looking for Hopkinton to pay for is an independent review of the proposal. As part of that process they expect to ask Annual Town Meeting to pay for the contract, which would be reimbursed by Hopkinton.

Vice Chair Chelsea Malinowski went further than most of the Board. She recommended the Town request that Hopkinton pay for all of the water system capital needs. That included completely unrelated items, like the Presidential Drive and Fisher Road connection to improve water flow in a section of Town that the Fire Chief has flagged as problematic. Andrew Dennington offered some support that the sweetener might be needed to convince Town Meeting voters.

Galligan countered that Hopkinton will also need their Town Meeting’s support. The Board discussed the potential for the state legislature to step in and force a less desirable agreement if the Towns can’t resolve the issue between themselves.

The Board ultimately voted unanimously to propose just the full cost of all of the work related to the project, including some administrative costs for Town staff’s time dedicated to the work. They said they would let Hopkinton know that they may need to go back to them to discuss some additional expenses if needed to get Town support.

As part of other discussions, the Board has asked the Public Works Planning Board to hold hearings on the topic, including a presentation by Butler. It’s unclear if that will wait for the hiring of new Public Works chief. (My impression from the last update on that topic is that the earliest a new hire is likely to start is early February.)

*Cook advised fellow Select Board members of her request to Butler at their August 9th meeting. At that point, the Capital Planning Committee had already begun looking at the project at the request of DPW Superintendent Karen Galligan. Lisa Braccio, member of both the Select Board and Capital, told Cook at their September 20th meeting that Capital members were frustrated at the overlap and disconnect. She asked for improved communication going forward.

I think the most important datapoint for taxpayers is buried deep in the report: the cost to Southborough taxpayers. That number? A cool $8M of which Pare suggest Hopkinton might pay $2M.

My understanding from the June presentation (as I wrote in my coverage of that meeting) was that PARE was making a suggestion, but the financing aspects were really to be determined between the Towns. His suggestion was that Hopkinton invest $8M in Southborough’s infrastructure. Southborough would then pay for half the cost of replacing the Oak Hill Tower tank, costing our town $1.5-2.5 million. (An article I linked notes that the entire project for Hopkinton was projected at $25M including the work needed on their side of the border.)

The Select Board wasn’t in favor of agreeing to that. Instead, as I wrote in this story, they are proposing that Southborough would pursue the project if Hopkinton covers all of the costs – including administrative costs of Town staff.

It’s possible that is just a beginning negotiating position. But member Sam Stivers argued that he didn’t believe in the strategy of asking for more than needed then going back and forth. He would rather set out what the Board is really looking for and stick to it with little wiggle room. (As I wrote, they also left open the possibility that they would ask for even more from Hopkinton down the road.)

I must commend you, Beth, for very accurate reporting on a complex subject. Also, your reply to Mr. Neihaus is correct. The Select Board position is that this project, if it is to happen, must cost Southborough absolutely nothing, and must result in some worthwhile improvements to the Southborough water system, albeit ones which, because of Southborough’s long term declining water usage, Southborough would not be doing soon on its own.
The SB, this week, reported its voted position on the topic to Hopkinton, which is now considering its reply. The question now for both Towns is, in effect, “Is it possible to reach agreement?”, or are the Towns too far apart in expectations.
Besides zero cost to Southborough, the Select Board also voted to tell Hopkinton officials that although it has the legal authority under State Law to enter into an agreement, it has decided not to do so without a Town Meeting vote of approval for relevant appropriations, even though those warrant funds would need to be reimbursed 100% by Hopkinton. So, as it stands now, if it seems as if the Towns could agree on terms of a contract, then the next step of whether to proceed will come before Town Meeting in March.
For readers who want more information, in great detail, the topic was discussed in public meetings of the SB, on September 20 and November 21, and a good shorter review occurred at a public meeting of the Advisory Committee last Wednesday, December 14. All of these can be found on YouTube. There have been no Executive Session meetings on the topic. There has been public input in these meetings, and it has brought forward good questions. Most of this material is also available on the Town website as text and slide presentations.