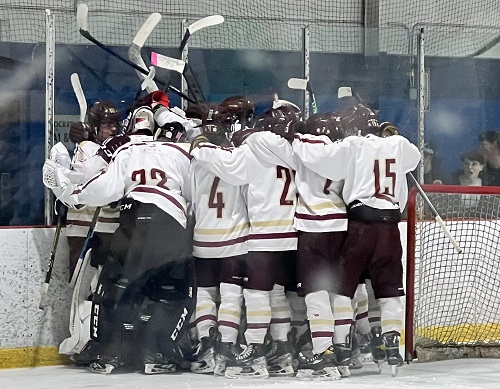 Above: ARHS Boys celebrated beating last year’s Boroughs Cup Champions in the first round of this year’s mini-tourney. (cropped from tweet by ARHS Athletics)

A quick update for fans of ice hockey and Algonquin sports. Just a week into the competition season, the Titans Boys Ice Hockey team is vying to take home a tournament cup.

ARHS will be playing in the Boroughs Cup final tomorrrow.

On Wednesday, the Gonk Boys shut out last year’s cup winner, Marlborough, 0-3 in the first round of the 4-school tourney. The Telegram recapped:

Ben Yosca and Andrew Hodge each scored on the powerplay, while Jack Gulachenski added a goal and Jack Stiles made 21 saves to earn the shutout as the Titans (2-0-0) blanked the Panthers (1-1-0) in a Borough’s Cup semifinal at NorthStar Ice Sports.

They’ll be facing the one non-borough team in the Boroughs Cup — Wachusett Regional. (Westborough lost to them 3-5.)

The game will take place at North Star Ice sports at 7:30 pm on December 17th.