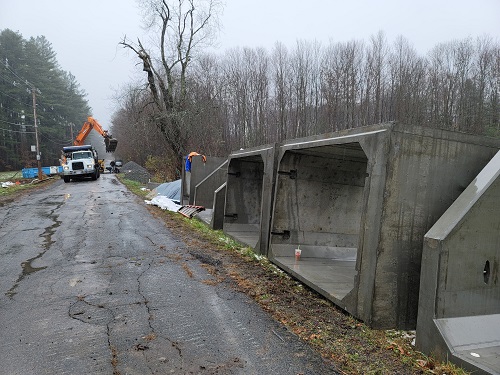 Above: Work that began on the collapsed culvert in November has been completed and the road reopened. (image from DPW Facebook post)

Yesterday, the Town issued news that Northboro Road is open. The section between Main Street and Johnson Road had been closed since late spring of 2021 is now reopened for use.

At the Select Board’s last meeting, Town Administrator Mark Purple noted that the culvert work was done but didn’t know when the road would be opened. In that discussion, Purple credited outgoing DPW Superintendent Karen Galligan with having the idea to plate over the culvert giving the Town a few more years of use and putting off the expense.

But, it’s worth noting that the delay appeared to come at a price.

In spring 2018, the Town deferred asking voters to approve $40,000 towards fixing the culvert on Northborough Road. Instead, a metal plate was placed over the section to help keep the road in use. This past May, Purple explained to the Select Board that at that time, the Dept of Public Works had staff expertise that would have allowed them to do the job in-house.

That DPW staffer has since retired, requiring the job to be outsourced when the road started to collapse three years later.

The Town was forced to close off access for safety concerns. In the summer of 2021, the Select Board briefly discussed looking into the possibility of converting the road into only use for recreation, but never pursued it. (Subsequently, the neighborhood on Chestnut Hill Road, used by many as an alternative route while the culvert was closed, petitioned to have a section of their road closed for recreational use.)

Town officials posted in the 2022 Annual Town Meeting Warrant to ask voters to pay $38,500. They decided to pull the request on the floor when they found the bid came back at over $192,500. Town Meeting voters instead approved the funding.

Some voters sought to approve the additional $84K needed but were prevented from making the motion. Moderator Paul Cimino told them that, based on the Warrant, voters who didn’t attend the meeting didn’t have fair notice of the possibility of dedicating that much money to the project.

Following up Town Meeting comments, the Select Board and Capital Planning took another look at fixing the collapsed culvert. On May 31st, the Select Board voted to use the Town’s ARPA funds* to cover the $84K funding gap for the project to reopen the closed section of Northborough Road. (They included it under the category of “Property Tax Abatement”. Those are expenses that the Board rationalizes are essentially lowering the property tax burden since otherwise residents would have to cover the costs by paying higher taxes.)

This summer, Galligan anticipated the culvert would be repaired by October. In mid-November, the DPW posted to Facebook that work had begun.

*ARPA is the federal funding granted to states and towns through the American Rescue Plan Act. When Southborough sought to get some of the funds that the state was using towards infrastructure projects, Purple worked with our State Senator Jamie Eldridge to have a portion of the culvert project covered. Presumably if that project didn’t exist, they would have tried to target another infrastructure project in town. Southborough’s own ARPA funds are $3M that can be put towards almost any project. You can read more about how the Select Board has been designating those funds here. (They will also be considering more allocations in their meeting tonight.)

Really scratching my head on this one.

Yes, very happy the road is fixed. But a 4 1/2 year repair process , an 18 -month closure on hat stretch of Northborough Rd., a Town Meeting.
nearly $ 1/4 million dollars in taxpayer monies?

Am I the only thinking this job could have been appropriately completed in 2 or 3 days by a small crew with a Kubota, asphalt cutting saw, plate compactor, and couple lengths of corrugated metal drainage piping?

sorry for the armchair quarterbacking, but this seems ridiculously over-engineered for a the channeling of a drainage ditch- (?)