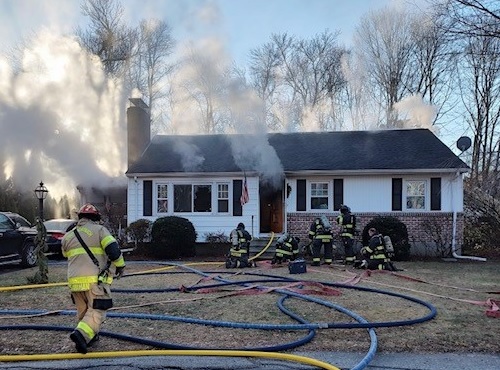 Above: A Southborough family’s home was heavily damaged by a fire the morning after Christmas. (image cropped from Facebook)

Another home in Southborough was damaged by a fire yesterday. While no one was injured and the fire “quickly brought under control”, the home is uninhabitable.

A GoFundMe has been setup to help the family with two young children who were displaced by the fire.

The Southborough Fire Department posted on Facebook about the Monday morning fire at 19 East Main Street:

At approximately 08:15 on Monday, December 26th, the Southborough Fire Department was alerted of a residential structure fire at 19 East Main St. Engine 22 and Ambulance 28 were first to arrive with initial report from Incident Commander of heavy smoke and fire coming from the structure. A first Alarm was transmitted, activating automatic aid from surrounding departments. The blaze was quickly brought under control by the initial engine company and later fully extinguished with assistance from Southborough’s Tower 21, Westborough Engine, Hopkinton Tower, Ashland Engine as RIT, and Marlborough Engine with station coverage. Other Southborough supporting apparatus on scene were Ambulance 29, Squad 24, Car 30, and Southborough Police. All occupants were able to evacuate without injuries. No Firefighter injuries were reported on scene. The American Red Cross responded to the scene to assist with the displacement of a family of four. The cause of the fire is still under investigation by the Southborough Fire Investigation Unit with assistance from the District 14 Investigation Team.

According to Select Board Chair Kathy Cook, the displaced family has a 2 year old and 5 year old. Vice Chair Chelsea Malinowski created a fundraising site to help the community pitch in.

The Palmer family’s house caught fire on the morning of December 26, 2022. Fortunately, no one was hurt but they lost just about everything. Several members of the community have reached out to help and the family has accepted setting up a Go Fund Me page to help them during this difficult time. They have two young boys and they are navigating what needs they have for their family. We will update here as needed. Thank you all for reaching out to help the Palmers during this difficult time.