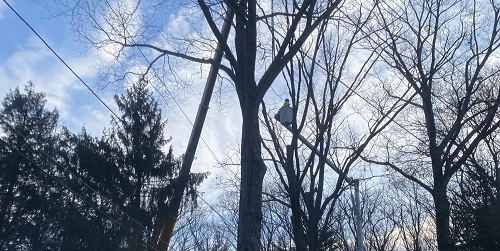 Above: It’s hard to tell the difference between live and dead trees this time of year. But never fear, the trees being removed today should be ones that were confirmed as dead/unstable when surrounding trees were full of leaves. (image cropped from Facebook)

Southborough’s Public Works posted an update on tree removals taking place in town today. Anyone driving on Stub Toe Lane and Gilmore Road is warned to be safe while driving through the work zones.

Last year, the Select Board and Planning Board agreed on many trees throughout Town as confirmed dead or unsafe and should be removed. At Planning Board chair Meme Lutrell’s request, the removals were to wait until at least fall, after nesting season was over.

The trees were added to a pre-existing list of dead trees that were already approved for removals.

At the Special Town Meeting in October, voters approved appropriating $100K for to get the removal work done. Additional spending of up to $52K was approved by the Select Board using ARPA funds. In November, the Select Board approved a $110K bid for the work (allowing them to return $42K to the ARPA spending pot).

Southborough’s awarded contract was through the Metropolitan Area Planning Council and was bundled with projects for other towns. In early December, Select Board member Lisa Braccio asked for the contractor (Stumpy’s) to be reminded that if they want the work, it needs to be done before the spring.

This morning, the DPW posted a warning on Facebook about the removals taking place on two roads today, January 9th. An update on the Town’s website specifies that a police detail is present.