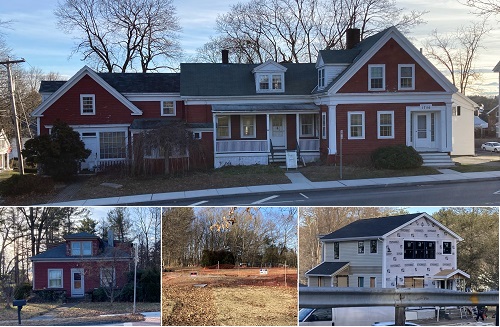 Above: An update on what’s happening with properties that pulled demolition permits, including “Doc Stone’s House” and 5 Cordaville Road. (photos by Beth Melo)

This week, the “Demolition Delay” expires for the historical home on 42 Main Street. Last week, the Chair of the Historical Commission pressed his optimism that that doesn’t mean that Fay School will knock down the building. Instead, he is hopeful that they are on the cusp of a “shining example” of how the bylaw can lead to positive results.

While I’m sharing that update, I’m also including news on recently imposed delay, and prior demolition permits for historic homes in town.

In 2017, Fay School purchased 42 Main Street, the historic, iconic red house across form the Town Common — affectionately known to many as “Doc Stone’s House”. A year ago this week, an application was pulled to tear down the building. When the news broke, many residents in town were upset. Fortunately, the Demolition Delay Bylaw allowed the Historical Commission the ability to pause the demolition, view the property and discuss preservation options with the school’s representatives.

As I reported in May, the Fay School Trustees agreed to take a deeper look at the situation based on public interest and the Commission’s findings. The private school contracted an architect to study the property.

Now, the clock is about to run out on the Commission’s ability to halt demolition while it undertakes efforts to Preferentially Preserve the building. The last day is this Thursday, January 12th.

At Historical’s most recent meeting, Chair Kevin Miller recapped for his Board some of the discussions he had with the President of Fay’s Trustees, Southborough’s James Shay. According to Miller, Shay was enthusiastic about the extensive report Building Conservation Associates, Inc wrote up with fascinating details about the historic building.*

Miller repeatedly stressed his belief that Shay is sincerely interested in the potential for rehabbing the building. But he did acknowledge that until financing is in place, due to his “fiduciary duty” Shay was unwilling to withdraw the demolition permit.

Fellow members indicated that the school’s unwillingness to withdraw the demo permit and restart the clock made them nervous. But they agreed with Miller that the Commission didn’t have the authority to do anything beyond what it had already done.

During Public Comment, resident Patricia Burns Fiore asked what notice the Town would have if Fay decided to bring in bulldozers after Thursday. Her concern was the possibility the public wouldn’t have the chance to try to apply public pressure to stop the demo. At the time, Miller was unsure but doubted that it could be done immediately without any notice to Town authorities.

In response to a question by resident David Parry about the possibility of moving the building, Miller assured that if Fay decided they don’t want to save the building he would be having those kinds of conversations with them.

Since then, both Fiore and Miller followed up with the Building Commissioner and I followed up with Miller. Miller told me that an impression that Fiore had gotten was inaccurate. She is correct that Fay will be entitled to get its demolition permit after this Thursday. But they won’t automatically be able to immediately proceed. There are some boxes that will first need to be checked with the Town.

Miller again stated his strong belief that Fay wouldn’t seek to take actions to demolish the building without first communicating with him/the Town. But there is a bit of a fail safe in case he is wrong.

First Fay would need to verify for the Building Department that the utilities are all turned off and (since the owner isn’t a construction firm) that the contractor is licensed for conducting demolitions. When that information is input into the Town’s tracking system, both the Historical Chair and Vice Chair are signed up to receive alerts. If that happened, Miller would reach out to the school. He also assures that he would call an emergency meeting of the Commission in order to make the public aware of the school’s actions.

Just as the Main Street property is emerging from its demolition delay, another property in the Historic District was put under one.

In a hearing on Thursday, the Commission voted that it was in the public’s interest to delay demolition of the small house at 5 Cordaville Road (across Route 85 from the Community House and Woodward School). The news was not welcomed by the Kendall Homes developer, Southborough’s Tim Black.

Miller repeatedly told Black that the Commission isn’t in favor of delay just for the sake of delay. The intent is to slow everyone’s roll and allow them to consider viable options. Black countered that he “respectfully disagreed” based on the fact that he hadn’t been contacted by any Town officials or realtors since he put in the permit.

At the discussion in their November meeting on whether to schedule a hearing, Black had indicated that the house should be pulled down for safety reasons. After a recent walkthrough of the home, Commission members said it didn’t appear to be in danger of collapsing. Black clarified that what he meant was that he was concerned about his ability to bring the house up to current building and energy codes, and “build an energy efficient safe home that you guys are willing to put your kids in.” He stated that he doesn’t trust the 100 year old studs and followed that he couldn’t get anyone from Fire Dept to publicly speak on safety of the building.

In the hearing, Black noted that his company focuses on new construction and isn’t suited for complicated restoration work. If he jacked up the house to replace the foundation with a modern one, at that point he’d ask himself what the point is of not simply tearing down the building. He also wondered what he was supposed to tell the owners (sisters who had inherited the property after their brother died). Member Jim Blaschke posited that there might be someone else who would find the project economically feasible.

Black explained that his intention was to tear down the building to replace it with their typical 2,600 sq ft colonial home, more than twice the footprint of the current home. He confirmed that the perk test limited the septic to a 2 Bedroom house. Commission members seemed to interpret that as supporting their view that fixing up the small house may still be a viable project for the owners.

The Commission unanimously voted to enact a delay. Blaschke offered his rationale as based on the property location, its exterior condition, historical significance and the fact that he does believe there is the potential to find a specialist who would refurb the property and still make a little money on the project. Vice Chair Kate Battles supported that summary.

To read more about the property’s history, click here.

Prior Chair Michael Weishan interpreted the bylaw, and policies the Commission adopted, as allowing them to instruct the the owner that if she wouldn’t preserve her house she needed to make an effort to seek a buyer that would. The Board disagreed with the Commission’s interpretation of the Bylaw and Town Counsel confirmed that the Commission’s actions weren’t allowed.

Since the delay had expired without working out a solution, the owner was free to demolish the home. That took place on August 31st, and the lot currently remains vacant.

As for the owners’ future plans, all I can share is that she initially intended to build a single family home and that she was unsuccessful in getting the property included in the map for the revamped Downtown District zoning passed in 2021. Therefore, it is still subject to Residential B zoning restrictions.

As a result of the discussions over 15 Main Street, the Commission worked with Town Counsel to adopt a revised policy. (The incident also prompted the Board to propose an Article, passed by Town Meeting, that requires any board/committee with authority to pass enforceable regulations to hold a public hearing before adopting/revising them.)

There is a historic home that has already avoided demolition after the owners applied for a demolition permit. Ironically, that was one that the Historical Commission didn’t vote to interfere with.

In December 2021, the family living at 89 Framingham Road was displaced after the house was hit by a car, causing a fire.

In July of 2022, the homeowners pulled a permit to demolish a home. Because the house was historically and architecturally significant, in normal situations the Historical Commission would have met to vote on whether to hold a hearing for a potential demolition delay. However, the bylaw has a clause stating that it can not interfere with the Building Commissioner’s right to grant an emergency demolition permit when needed.

Building Commissioner Laurie Livoli believed the condition of the building qualified for the emergency permit. She invited Miller to participate in a discussion with Town Counsel. Counsel agreed and Miller didn’t object. At their next meeting, Commission members agreed that under the circumstances, they supported the decision given the unfortunate circumstances.

The property was sold in early November. Last Thursday, Miller was happy to share that the new property owner had invested in renovating rather than tearing down the historic home.

Miller couldn’t be sure that the renovation will restore all the gingerbread detail of the original home, but was still happy to see a happier outcome than they had anticipated. You can read more about that historic home here.

*Miller shared the report with his Commission, which means it will be a matter of public record. However, according to Miller, Shay provided that report based on the understanding it wouldn’t be publicly posted until the minutes are posted in February. He wasn’t comfortable sharing that with the public until after it has been shared with the full Board of Trustees. (The Board will receive an update and have a chance to discuss the findings as part of their meeting later this month.) Miller expects the minutes and documents to be posted the day after their next meeting on February 16th. (You can check here in the future.) In the meantime, you can find information on the property, including details from Mass Historical’s database, that was posted with the Commission’s April minutes here.

Updated (1/11/23 2:54 pm): Kevin Miller reached out to note that I incorrectly referred to the report on 42 Main Street as by Fay’s architect. It was by their consultant Building Conservation Associates, Inc. (BCA) of Newton, Massachusetts. (They have also hired the architecture firm Curl Architecture of Melrose, but that was not who wrote up the report.)

Additionally, Patricia Burns Fiore reached out to share an email from Building Commissioner Laurie Livoli who had written that upon the expiration of the demolition delay, the Town would be sending Fay the requested permit and the school would not be required to contact the Town, therefore there would be no notice. Since that doesn’t seem to mesh with what I learned from Miller, I reached out for clarification. But that will apparently have to wait since she is out of the office until the 18th. I hope to follow back up with her and will update this post when I do.

Updated (1/18/23 8:23 am): Livoli promptly responded on her return to the office. She confirmed that the applicant hadn’t done everything necessary to allow the permit to be issued, so it is on hold. Therefore, the scenario I shared, described by Miller (and in the article above) is more accurate than what she wrote to Fiore before she spoke with Miller.