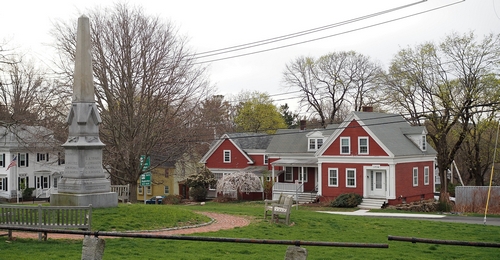 Above: Residents have been upset by news that Fay School sought to tear down a beloved house at the heart of Southborough’s newly official Historic District. The Historic Commission Chair expressed optimism steps the private school is now taking. (photo contributed by Allan Bezanson)

Part of conversation’s about the latter also confirmed that the “Historic District” around Southborough’s Town Common has been officially added to the National Register of Historic Places.

The announcement from St. Mark’s School is the big news. The school is contracting a firm to survey the construction site “to determine whether or not this land contains evidence of an Indigenous Peoples burial site.” (Scroll down for details on that.)

Since, I haven’t found the time to inform readers about the 42 Main Street issue before this, I’m focusing on that news first.

In 2017, Fay School purchased the historic home at 42 Main Street, known affectionately by the community as “Doc Stone’s House”. In February 2017, the school pulled a demolition permit. The news was upsetting to many residents who value preserving Southborough’s historic character.

The attractiveness of the parcel for Fay seems clear. It abuts other school property and sits on the corner of Main Street and Middle Road where the school’s main entrance is.

But the parcel also sits across from the Town Common. In public meetings, Historical Commission members and residents repeatedly referred to it the red, Greek Revival style house as a significant landmark in the newly recognized Historic District. (Scroll down for more on the district.)

Under the Demolition Delay Bylaw, the Commission confirmed in February that the building was historically and architecturally significant enough to warrant a hearing.

At a public hearing in April, members discussed Fay’s claims that they initially intended to rehab the building but discovered the investment would be “counterproductive”. Some members who own historic homes of their own noted that buying a house that old comes with the expectation of dealing with the asbestos, lead paint, and even some potential foundation issues that the school complained about. They also lamented that the school had left the building unheated for five years.

Members asked if Fay would consider putting the property back on the market. The answer on that was unclear.

Chair Kevin Miller highlighted that a private residence wouldn’t have to meet the same ADA and other standards that a building utilized by Fay would have to. He also reminded that new owners could take advantage of the Towns adaptive reuse bylaw for historic homes, allowing some mixed use.

The Commission voted to “preferentially preserve” the building. That puts a delay of up to 9 months for the Commission to work with owners on looking at other options before it can be torn down.

(Worth noting, though they aren’t up yet, the Commission plans to post documents that were discussed at the April 12 meeting with the meeting minutes. You can also check out some photos from the Commission’s tour of the house right.)

You can find more detail on the February and April discussions and a Southborough Historical Society meeting on the topic in the Community Advocate’s May 7th coverage here.

On May 12th, the Commission brought in Sally Watters of the Historical Society to present on the building’s history. (You can watch that presentation here.) Afterwards, Miller shared his optimism that Fay School Trustees are taking the community concerns seriously.

He passed on news from Fay’s head Trustee that they were talking to prominent preservation architects. The goal was having one “give the matter a much deeper dive”. [Since my initial post, Fay reached out to me with a statement about this.***] (In prior meetings, members questioned that Fay hadn’t gotten an actual estimate on fixing up the property.)

Member Rebecca Deans-Rowe and Miller discussed that the property’s inclusion in the Historic District makes it eligible for preservation funding to help deal with the asbestos issue.

Miller encouraged the commission and the public to have faith in the continuing process. [For more on that process, scroll down to my post Update.]**

The Chair’s optimism may have been buoyed by news that his faith in another process had just paid off in his eyes. . .

As I’ve previously covered, the construction project for rerouting St. Mark’s Street and building a park next to the Library has been mired in controversies. At Thursday’s meeting, Miller noted he was well aware of other issues, but said their job as a Commission was to focus on one aspect – addressing whether the park project may be on a former old, unmarked burial site for native people.

Miller recapped that the Commission had written a letter to St. Mark’s School drawing their attention to recommendations by the Mass Historical Commission. That letter cautioned it would be best to conduct an archeological survey before constructing anything. He later had a follow up conversation with the private school’s Chief Financial and Operations Officer Robert Kuklewicz.

Since then, he’d heard from people wanting to know the school’s response. He had advised to give the school time to consider. On May 11th, the night before the most recent meeting, Miller spoke with Kuklewicz again. Kuklewicz issued a letter from the school committing to conducting a survey. The letter states:

” We were particularly interested in the life safety benefits of having a wider turning lane for fire trucks and other emergency vehicles turning on St. Mark’s Street from Route 85 as a result of the work.” . . .
“As noted in your letter, the Historical Commission is committed to working productively and in good faith with all concerned parties, and we are committed to working with you. To that end, we will hire a cultural resource management (CRM) firm specializing in the historic archaeology of New England to conduct a survey of the construction site to determine whether or not this land contains evidence of an Indigenous Peoples burial site.”

The letter points out that the school is aware of the discussion that took place at Annual Town Meeting (where voters notably rejected easements for the project.) Miller told the Commission he was impressed with the credentials of the firm selected, Archeaological Consulting Services.

Members Annie Pfaff and Kate Battles supported that they were happy with the turn of events. Member Jim Blaschke wished that the work was done before the area was torn up. Miller acknowledged they all wished that had gone differently. The Commissioners thanked the school and the St. Mark’s Street Park Working Group for its good work.

In 2015, the Commission announced they were pursuing having the area of Main Street around the Town House officially recognized as an Historic District. In 2017, Town Meeting voters approved hiring consultants to help them pursue the designation. Then there was mostly silence until last fall. At that time I heard that the official recognition was imminent. An announcement was never issued, but officials began referring to it as official.

The state database for historic properties indicates the official adoption by into the National Register of Historic Places happened in December. You can see the designated map in the image right. The parcels outlined in red are part of the district.

(It’s worth highlighting here that in the past the Commission has credited late member Kate Matison for much of the work on that initiative.)

On a less positive note, Miller shared news that it looked like there may have been vandalism of grave stones in the Old Burial Ground. After he was alerted by a neighbor (who had filed a police report), Miller visited the cemetery. He shared photos of grave stones laying on the ground. He believed one was recent and another had been lying face down for longer. He also noted that a veteran’s gravestone appeared to have been rocked back and forth in an effort to topple it and is now loose.

Miller also expressed dismay that a broken branch hanging down into the OBG was still that way three months later.

The Chair noted that he believed that issues in the OBG that have been known about for a long time. He would like to see gravestones reset and trees trimmed in a way to avoid more damage. He followed that the Commission doesn’t have the authority to do anything. He wanted to approach the Select Board in a collaborative, friendly, constructive way about resolving the issues. He indicated if the Select Board wanted them to, they would consider “taking the reins” to oversee the property.

Deans-Rowe asked him to make clear that not just anyone could reset the stones. Miller agreed it requires expertise. The Commission agreed with his suggestion to reach out to the Select Board.

Last year, the Historical Commission came under fire for enforcing Demolition Delay Bylaw under regulations it had adopted that the Select Board deemed a violation of the bylaw’s scope and intent. Town Counsel agreed. The old rules and regs were pulled and have not yet been replaced. Last week, Miller referred to a meeting of the Commission and Town Counsel in October where they debated a proposed new set of regulations.

According to Miller, Counsel said that regulations were “value added” and not needed in order to enforce the bylaw. Miller said that in his ideal world, the Commission would follow through on prior plans to update language in the bylaw. The bylaw itself would be very clear. Then the Commission would just create a flow chart to help the people follow the process without adding any rules/regs.

But the Chair noted that whenever you reopen a bylaw, you open a can of worms. (Between the lines, Town Meeting voters may decide to amend the bylaw in a way that is counter to the Commission’s goals.)

Three commission members will form a working group to draft new regs and/or bylaw changes. The draft would then be brought back for discussion with the entire Commission. If they decide to pursue new regs, they will hold a public hearing for community input before voting on adopting them. (That is the process approved by Town Meeting earlier this month.)

***Updated (5/18/22 2:35 pm): Fay School sent me an announcement about their decision to hire an architectural firm to research 42 Main Street while still leaving the demolition request in place. You can read that here.