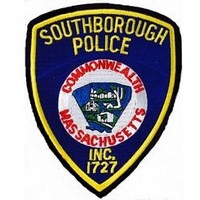 Southborough Police are investigating an incident of an apparently kicked (but not kicked-in) front door. It’s one of the many updates I’m sharing related to the SPD.

Another item I should highlight is tonight’s Select Board discussion on an agreement to work with 3 other Towns to establish a public safety Regional Dispatch Center in Westborough.

Below are details on those and other updates from/about the SPD.

On Saturday afternoon, the SPD posted unsettling news of a strange incident on Facebook:

This morning at approximately 4:20 in the morning, a resident of Latisquama Rd. reported to SPD that they heard a loud bang at their front door. Officers responded to the home and observed a footprint on the resident’s front door. No entry was made to the home. . .

A reminder to our residents to please make sure that your home is secure and to report any suspicious behavior that you may see in your neighborhood. Thank you.

The post also asked anyone with relevant information for Detective unit investigating the incident to contact the Southborough Police Department at 508-485-2122.

Tonight, the Select Board will be reviewing a District Agreement to form a Regional Dispatch Center in Westborough with the Towns of Westborough, Grafton, and Hopkinton. The agreement in the Board’s packet calls for the Towns’ Boards to execute decisions by February 24th. But the wording of the agenda does allow a potential vote.

Back in November, the Board held a dedicated meeting to discuss the potential for a Regional Center. Discussion again included that the proposal isn’t just about saving money. The center would also increase resources to allow better handling simultaneous calls and incidents.

There was continued pushback from some vocal community members, including representatives from the Dispatch and Police unions.

Some urged that instead of regionalizing, Southborough should invest in increased staffing — a Dispatch Supervisor plus two dispatchers on duty at all hours, (24 x 7). Generally, Southborough only schedules one dispatcher per shift. (Though, personnel indicated that when they know in advance of big storms, then they try to schedule two.)

You can read the minutes from that meeting here and view it here. For tonight’s agenda and packet with the agreement, click here.

On related and semi-related notes. . .

Speaking of staffing, the Board is also scheduled tonight to approve a new hire to join the dispatch team.

But staffing dispatch isn’t the only communication issue the public safety departments face. In the past they’ve grappled with technical issues related to their radio communications.

It appears, the Town was able to conduct upgrades in the fall. According to a Facebook post by the Southborough Fire Department that was made possible through temporary support for the police and fire radio signals by a regional mobile communications unit funded through the Central Region Homeland Security Advisory Council.

Meanwhile, tonight the Municipal Technology Committee has been discussing the issue of “cellular desserts” in town effecting some residents’ mobile phones. (Obviously, that’s not just an inconvenience. It can be a safety issue.) An update on that is on their agenda for tonight.

What the SPD has been up to

Chief Ryan Newell shared the quarterly graphic reporting on what the department was busy with for October through December.

The graphic indicates officers made over 10 arrests and specifies that another 598 citations were issued (48 of them were for “Criminal Applications”).

It also shows that they responded to:

The graphic notes that the Department provided:

Below are some of the SPD’s Facebook posts about community services in December that may have fallen under that last category.

The department shared that their “Fill a Cruiser” event was a success. They collected and delivered a slew of donations to the Southborough Food Pantry.

The SPD also helped out at a “Shop with a Cop” event at the Framingham Walmart. Local law enforcement agents helped kids safely shop for presents without the prying eyes of parents/guardians.

I followed up with Chief Newell and Fire Chief Achilles after both my child and I witnessed recent incidents in town of drivers not pulling over for emergency vehicles. I wondered if the frequency had increased. The answer was it is an infrequent occurrence – but both encouraged sharing a reminder – drivers are required to pull over to let the emergency vehicles pass when they are using their sirens or lights.