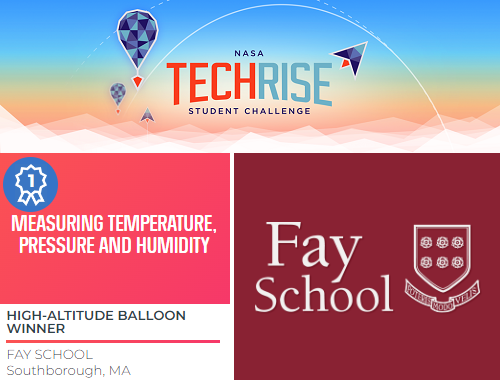 Above: Fay students’ experiment was one of the winning submissions for NASA’s TechRise Challenge for grades 6-12.

NASA announced the winning teams of a contest “to engage students in technology, science, and space exploration.” A group of 6th graders at Fay School was one of the winning teams, among only 60 nationwide and 3 in the state.

This is the second year that NASA has held the TechRise Challenge. The contest was open to students in grades 6-12 from schools (public, private or charter) in US states and territories. According to their representative:

This year, the challenge was to design a science or technology experiment that could be tested on a NASA-sponsored high-altitude balloon flight. . .

Each team will receive $1,500 to build out their experiments, a flight box in which to build it, technical support from Future Engineers, and an assigned spot on the high-altitude balloon flight.

I followed up with Fay School for more details on their winning experiment, “Measuring temperature, pressure and humidity”. Their representative explained: 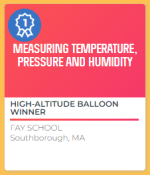 Earlier this fall, sixth graders in Grace Crowell’s science class worked in small groups to brainstorm an experiment and submit a TechRise proposal. One of these teams – composed of Raymond R., Ellie K., Ella Z., and Taehee K. – was selected to move forward.

Their proposal. . . describes an experiment to learn more about what living organisms would need to survive in space. Their plan is to design a machine to measure temperature, pressure and humidity in space; their machine will fit in a box that measures 4”x4”x8” and will use environmental sensors and data capturers to record air quality and temperature, among other data points.

In the coming weeks, the Fay team will meet with advisors from Future Engineers and will work through the NASA TechRise Introductory Learning Modules to develop the foundational skills needed to build a payload. Throughout the spring, the Fay team will have virtual weekly meetings with the NASA TechRise engineering team regarding the design, development, and build of their experiment.

They will be building their payload in our new Center for Creativity & Design. . .

Flight tests will offer more than four hours of float time at approximately 70,000 feet and provide exposure to Earth’s atmosphere plus views of Earth.

As for the use of balloons for the experiment, NASA explains:

High-altitude balloon platforms have catalyzed fundamental discoveries for decades that contribute to our current understanding of the Earth, the solar system, and the universe.

“NASA’s missions of tomorrow are sparked by the accomplishments of the Artemis Generation today in classrooms across America,” said NASA Administrator Bill Nelson. “Through opportunities like the TechRise Student Challenge, young people are deepening their passion in science and technology, preparing to be the future innovators and pioneers who help humanity soar to new heights and unlock more secrets of the universe.”