Before the election, I promised to provide voter turnout numbers for Southborough and surrounding towns. Turns out those numbers are hard to come by. According to the State Elections Division, results are not released until they are certified by the Governor’s Council. And since overseas ballots have an additional ten days to reach the local city or town, the official results will not be available until the end of the month.

So, what I can offer is unofficial results as reported in local media. According to the data I was able to dig up, Southborough turnout wasn’t too shabby. We came in at about 85%. That’s significantly more than the statewide turnout of 66%, and more than our 71% turnout in the 2006 state election. The highest turnout rate I found was Bolton at 88%.

See the graph for more details (click to enlarge). 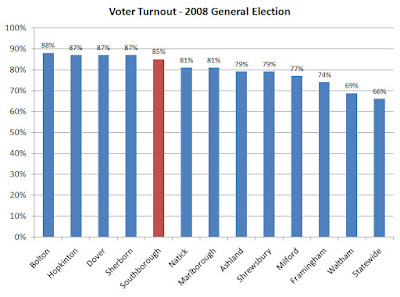