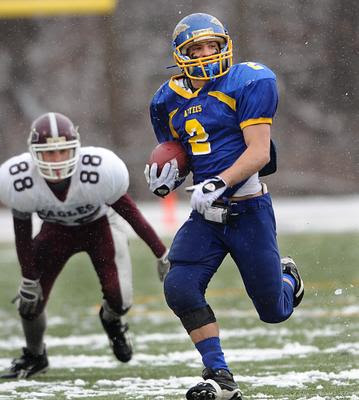 Assabet Valley’s Nick Johnson carries for a long gain in the fourth quarter that set up the game-winning touchdown in the Div. 3A Super Bowl against Easthamptom at Worcester State College Sunday, Dec. 7.  (Photo from the Metrowest Daily News)

Some tidbits from Southborough stories in the media this week.

“We had to do it. We got it done. … We’re a voke school, but we can go up against the best and there’s no doubt about it.” -Assabet football player Nick Johnson after winning the Division 3A Central Mass-Western Mass. Super Bowl game on Sunday ( link)

“It’s really a tsunami hitting restaurateurs. The market is contracting, spending is contracting, and food costs are at a 29-year high.” -Peter G. Christie, president and chief executive officer of the Southboro-based Massachusetts Restaurant Association (link)

“Shopping is not about acquiring masses of things, it’s about getting the thing.” -Southborough fashion plate and executive Kathleen McDonough (link)

“Every year or two, something unexpected tends to happen where an (underclassman) comes along and doesn’t play like they’re young. Freshmen tend to be skilled but they must learn to play within a system. It takes some time.” -Algonquin girls basketball coach Ron Jones on the upcoming season (link)