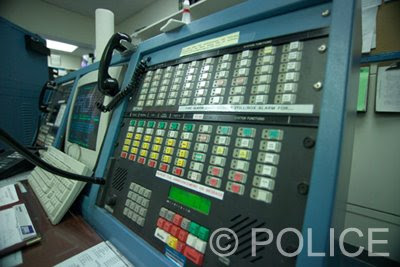 The Board of Selectmen on Tuesday night authorized up to $12,000 to replace failing equipment in the Southborough Police Station. The money will be used to replace smoke detectors as well as a dispatch console. The selectmen also approved an additional $4,900 to install a security system at the Town House.

Playing Russian roulette
Fire Chief John Mauro and Interim Police Chief Jane Moran presented selectmen with three options to replace a failing communications console (pictured above) in the Police Station’s dispatch center. Buttons on the console have been failing almost daily which can interfere with radio messages getting out to units in the field.

The three options ranged in cost from $5,000 up to $75,000. Chief Mauro recommended as a good interim solution the lowest-cost option, which calls for moving a backup console currently installed at the Fire Station to the Police Station and upgrading it as needed. The board agreed and authorized up to $5,000 for the work.

False alarms
At a meeting earlier this year, wiring inspector James Colleary told the selectmen the smoke detectors in the Police Station went off without cause 21 times in the past year. Colleary said the frequency of false alarms was increasing.

The Police Station currently uses residential-grade smoke detectors which will be replaced with a new wireless system at a cost of approximately $7,000. If voters approve the proposal for a new police station, the wireless smoke detectors could be relocated to another town building like the Historical Museum or Fayville Hall.

Security system for the Town House
With the go-ahead from the selectmen on Tuesday night, the Town House will get three new security cameras and a new keycard entry system at a cost of $4,900.