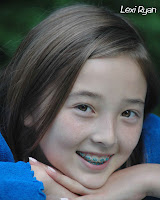 Catching a performance of the Charles Dickens classic A Christmas Carol is a holiday tradition for many. If you plan on taking in one of the performances this weekend at Worcester’s newly renovated The Hanover Theatre, pay special attention to the Ghost of Christmas Past played by 10-year-old Southborough resident Lexi Ryan.

The young Lexi has been performing in community and regional theater since she was five, when she made her debut as a munchin in the Southborough Player’s The Wizard of Oz. In addition to acting, Lexi is part of a singing and dancing troupe and is a backup singer for children’s performer Steve Roslonek of SteveSongs. In January, the Neary school student will begin rehearsals for Wheelock Theater’s production of Seussical opening at the end of the month.

In the production of A Christmas Carol this weekend, Lexi will sing a solo and be part of the overall ensemble in addition to her role as the Ghost of Christmas Past. The show runs today through Monday. Check The Hanover Theatre website for show times and ticket information.

Lexi is one of only a handful of actors mentioned in a review of the show that appears on the front page of the online edition of the Worcester Telegram and Gazette: