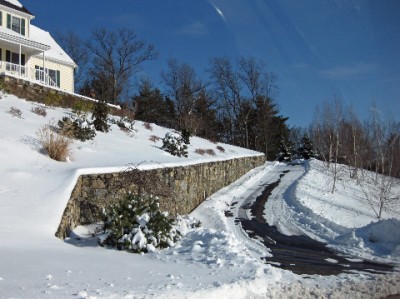 (This is part 4 in a series of posts about the proposal for a new aerial ladder truck in Southborough. For more information, see the series introduction.)

Rebecca Waterfall, one of the organizers of the Southborough Fire Ball, has reason to want a new ladder truck in Southborough. Like others in town, she has a driveway that cannot be navigated easily by many fire trucks.

Gone are the days when houses are sited close to the street on relatively flat lots. As building space in Southborough has become more precious, builders have gotten more creative about how to make lots work.

Forty-five percent of homes in Southborough were built in the last 25 years. Many of those homes were built on hilly terrain. Many have narrow or winding shared driveways. Tight turns, narrow entryways, and steep grades all make access a challenge.

Even older neighborhoods in town can be difficult to navigate. Take a mattress fire last November in a house on Winter Street (map), a narrow street that has an almost 90-degree corner at one point. The Framingham ladder truck called in via mutual aid struggled to reach the house.

But when you think of the towns that surround us, they don’t seem so different in terms of neighborhood layout and terrain. Shouldn’t their trucks be able to service homes in Southborough just as readily as they do homes in their own towns?

Fire Chief John Mauro Jr. says streets in Framingham and Marlborough are wider than in Southborough. And picture Route 9 in Westborough and it’s not hard to believe their needs might be different from those of our town.

Experience bears this out. Ladder trucks from Ashland, Framingham, and Westborough have all faced challenges navigating Southborough neighborhoods in recent months.

The implication, of course, is that if Southborough is going to spend nearly $1 million on a ladder truck, it better be one that’s actually going to work for the town. And who says we have to pay $1 million anyway?

More on that tomorrow.

Years ago, then Fire Chief Peter Phaneuf made numerous attempts by working with the Planning Board and ZBA to make some of these subdivisions more user friendly, with public safety in mind. After the Jacobsen Lane debacle, he found an old law on the books regarding fire lanes. Much to the dismay of some builders, the fire department has better access to some of these homes not because of the boards that should have held things to a higher standard, but because one fire chief did his homework, all in the best interest of protecting the residents, not the builders. As for the proposed ladder truck, the committee that investigated it has produced a report that is available to the public. No bells, no whistles, something that will be constructed for the needs of the Town of Southborough.