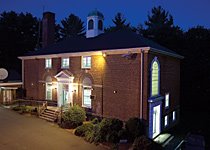 The Southborough Historical Commission wants to save one of the town’s historic buildings from the wrecking ball.

The town is studying the feasibility of building a new police station, and the leading plans call for the demolition of the existing building to make way for a new one. The existing police station was built in the 1930s as part of the former Peters High School. It was converted into a police station in the 1972.

The Historical Commission believes there is a way to meet the functional needs of the police department while preserving the existing building. They’ll present their ideas at a public meeting on Wednesday night. Along with architectural plans, the commission will discuss the financial and environmental impact of renovating the existing building. They’ll also talk about its historical significance and why we should consider saving it in the first place.

The meeting will take place on Wednesday, March 18, at 7:30 pm at the Senior Center, 9 Cordaville Road. (map)

Refreshments will be provided for those of you who need some additional incentive.