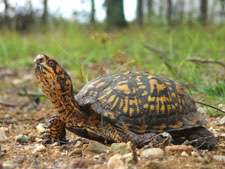 Did you know that of the 10 terrestrial and aquatic turtles native to Massachusetts, six are on the state’s endangered species list? And some of those endangered critters might just call the Beals Preserve home.

Members of the Southborough Open Land Foundation (SOLF), along with Turtle Conservation Biologist Lori Erb, are embarking on a project to catalog turtles on the preserve. They’ll start on Thrusday morning with Erb, who works for MassWildlife’s Natural Heritage and Endangered Species Program, teaching them what to look for.

It’s still too cold for the turtles to be out and about, so the actual cataloging will come later in the season.

President Sally Watters says SOLF has a goal of recording the types of wildlife on the Beals Preserve, and turtles are part of that. SOLF hopes to apply for several grants to help with stewardship of the land. “Having the plants and animals documented is an important aspect of the applications,” Watters said.

The session on Thursday is open to all, so if you’re interested, slide on your boots and join them at the corner of Main Street and Northboro Road at 9:00 am.

(Photo by Liz Willey via MassWildlife)