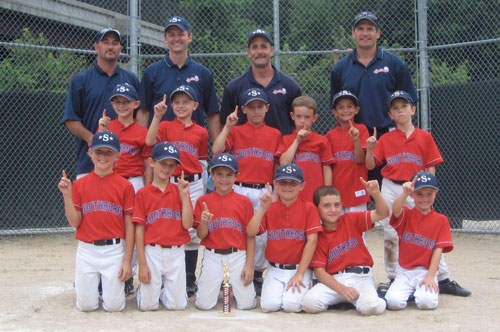 The Southborough 12-year-old Little League team may be getting all the press right now, but their 8-year-old peers also have a season to celebrate. Earlier this summer they took home a championship of their own. More details below from Coach Paul Secrist.

Congratulations to the Southborough Americans for winning the 2010 Ashland Sparkler Baseball Tournament Championship.

The 8 year old team played a great tournament, ending the 10-game round-robin play seeded second with an 8-2 record, earning a first-round playoff bye. In the second round of playoffs, Southborough defeated a tough Hopkinton team 5-4 to advance to the best of three championship series against the top-seeded, 10-1 Shrewsbury team.

In game 1 of the finals, Southborough faced some very good Shrewsbury pitching and lost 3-11.  In game 2, Southborough charged back with a 7-3 win to even the series.  In game 3, the lead went back and forth several times over six innings and ended in an 8-8 tie.  After two of the most spectacular extra-innings of baseball by both teams, the score was still knotted 8-8.  Because these two teams had split during the regular season, split during the first two games of the Finals, and were now deadlocked after eight innings of game 3, it was decided to award the championship to both teams. Congratulations Southborough 8 Year Old Champions!

Our family was lucky to be able to attend the best of three 8 year old championships while on vacation from Maryland. The games were well played with the final game as exciting as any Yankee vs. Red Sox matchup. Congratulations to the boys and their fine coaches!