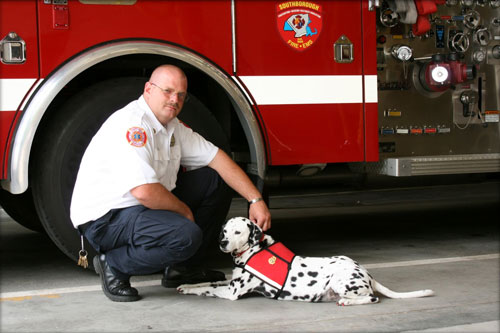 When Arkansas volunteer firefighter and fire safety expert Dayna Hilton — known to many as Firefighter Dayna — releases her new book children’s book Sparkles Goes to Boston next month, many Southborough residents will find the characters in the story quite familiar.

In addition to Sparkles the fire safety dog himself, one of the book’s main characters is Lt. Jim Peltier of the Southborough Fire Department. Also featured are Fire Chief John Mauro Jr and other firefighters from the department. So it only makes sense that Hilton has scheduled her book release event right here in Southborough.

. The release party will be held at the Southborough Fire Department on October 16.

Hilton says her goal is to promote fire safety skills, especially in children. Along with her Dalmatian Sparkles, Hilton has been credited with saving several lives through the lessons taught in her book and through her work with children.

Southborough became featured in Hilton’s second book after she met Peltier at the National Fire Academy in Emmitsburg, Maryland. Hilton and Sparkles traveled to Southborough from their home in Arkansas in 2008 to take photos for the book.

You can learn more about Sparkles, Firefighter Dayna, and the book on the Sparkles Goes to Boston blog (www.sparklesgoestoboston.com).