A bald eagle spotted on the roadside in Natick last week made headlines. Bald eagle sightings in Southborough are less unusual, but they’re still rare. I, for one, have seen plenty of hawks and herons and other birds flying around town, but I’ve never spotted an eagle.

My Southborough reader George is one of the lucky ones who has. Not only did he spot an eagle hanging out at the reservoir the other weekend, he had his camera handy to capture the scene. 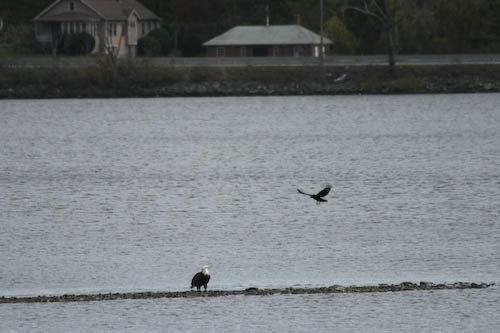 How amazing is that? The photo is taken from White Bagley Road with Route 9 in the background. The bird flying overhead is a crow who was harassing the eagle.

A few years ago a deer died on the ice where the water flows under White-Bagley and birds fed on the carcass. A young eagle fed there for a couple of days. I have also seen other eagles flying by. They are migrating or moving to warmer climes this time of year so, if one looks, it is not that unusual to see one or two. Eagle numbers have increased considerably in the past 20 or so years; various states have helped to increase eagle numbers and in MA they were introduced at the Quabbin Reservoir and now there are nests in many places across the state.

Here’s a close-up of the eagle in all its glory. 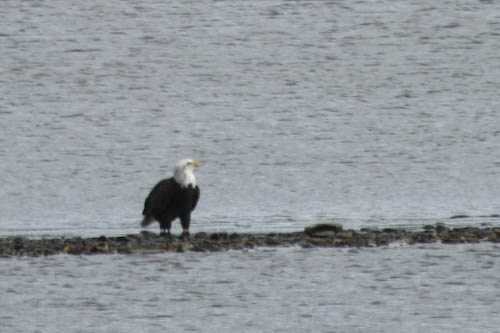 How about you? Have you seen eagles in and around Southborough?

Wow! That is really beautiful. Thanks George!

I remember there used to be one with a nest off of middle road along the reservoir. But I haven’t seen it in a quite a few years.

I was driving by when George took that picture. My family didn’t believe me when I said I’d see a bald eagle. Thanks for posting.

What a grand thrill! Thanks for snapping the pic and thanks for posting it here!!

I think think I had baby eagles in my yard on Middle Rd this summer. I contacted the audubon society but they didn’t really believe me. I know that giant baby was not a hawk. Glad to see that I wasn’t crazy!

We saw one in early September flying over Kallander field. We all had to do a double take!

what a beautiful photo! Thank you.

My 9 year old, from the back seat of the car, said he saw a bald eagle on the rocks in the reservoir last sunday. Not seeing it myself I was pretty sure he was mistaking it for a hawk of some kind. He was pretty psyched and gave me the ‘I told you so” when i showed him these pictures last night! Thanks for posting.

I saw a Bald Eagle land in the trees in the little island on the reservoir east of White Bagley a few weeks ago, but didn’t have a good camera to snap a picture. We will be keeping an eye out in March/April for a possible nest.

I saw a bald eagle in early October circling above my home on Pine Hill Rd.