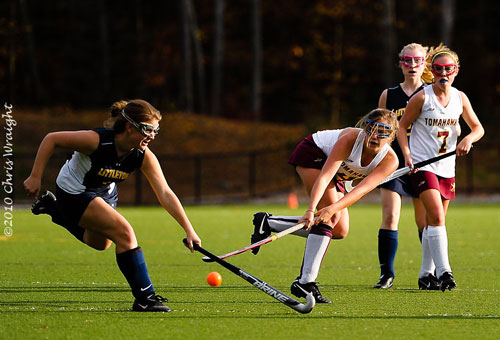 Above: The Algonquin girls field hockey team — shown playing in a game earlier this year — has made it to the district finals for the first time ever (photo by Chris Wraight)

Yesterday was a winning day for Algonquin. The girls field hockey, girls soccer, and boys soccer teams all competed in playoff matches on Tuesday, and all three won.

The girls field hockey team beat Westborough in overtime by a score of 3-2 in their semi-final match. They advance to the Division 1 Central finals against top-seed Quabbin. The game will be played on Thursday at 1:00 pm at Foley Stadium. It will be Algonquin field hockey’s first time ever in the finals.

The girls soccer team won their quarter-final match at home against Hudson by a score of 2-1. The second-seed Tomahawks will face third-seed Shrewsbury in the semi-finals on Thursday in Hudson. The game starts at 5:00 pm.

Capping off the day, the top-seeded Algonquin boys soccer team beat ninth-seed North High by a score of 4-2 to advance to the semi-finals. They’ll face off against fourth-seed Marlborough on Thursday at 7:00 pm in Hudson.