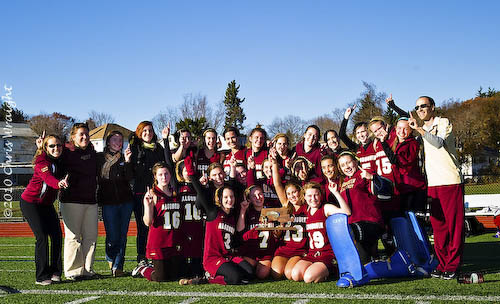 What a day in Algonquin postseason play.

The girls field hockey team won the division title yesterday by the narrowest of margins. The boys soccer team won their semi-final match against Marlborough in fighting style — literally. And for the defending state championship girls soccer team, yesterday was the end of the road.

The field hockey team won their first ever district championship in a close game against top-seeded Quabbin. Southborough resident Emily Stevenson scored the lone goal in the game. With their win, the girls move on to the state semi-finals. They’ll play the winner of the Western Division — either Longmeadow or South Hadley — next Tuesday at Holyoke College.

The boys soccer semi-final match against Marlborough yesterday was apparently a wild one. Officials ended the game with more than 15 minutes left to play and Algonquin on top 1-0 after continued fighting between the teams. No doubt it’s one the kids are going to be talking about for a long time. You can read all the details here.

The top-ranked Tomahawks will face off against second-seed Leominster in the Division 1 Central championship game on Saturday at 5:00 pm at Wachusett Regional High School. The boys will be trying for their second consecutive division championship.

For the girls soccer team it was a heartbreaker. The Tomahawks scored a goal late in regulation to send their semi-final match with Shrewsbury into overtime. When the game was still tied after two overtimes, they went to penalty kicks. Shrewsbury made all five of their kicks, while Algonquin made four. The final score was 2-1. The girls finish the season with an impressive 13-1-4 record.

Here are some photos of the field hockey championship game courtesy of Southborough photographer Chris Wraight. Click to enlarge.

Congrats to the Field Hockey team and coaches…well deserved. Good luck to both teams in the next round!

The Algonquin boys were not fighting. They were trying play soccer while subject to a barrage of trips, hits, high elbows and take downs from behind. I believe they showed admirable restraint by taking the high road. A game may have one yellow card. This one had many more including one for beating down an Algonquin player after the unsuccessful penalty kick half a field away, At this point Marlboro had five yellow cards and by MIAA rules, they had to forfeit the game.