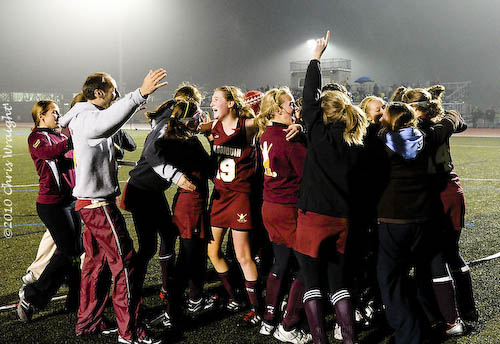 Above: The girls celebrate their win (photo by Chris Wraight)

The Algonquin girls field hockey team won their Division 1 semi-final match tonight against South Hadley by a score of 2-1. That means they’ll be heading to the state finals in Worcester on Saturday. Game time is 10:00 am at Worcester State.

Algonquin will be playing for its first ever state championship in field hockey. They’ll face off against Division 1 North champion Andover who won their semi-final match against Walpole today.

Southborough photographer Chris Wraight has promised photos of the semi-final game, so be sure to check back later for those.

Update: If you want to read more about the game, here are some links. Also, as promised, the excellent photos by Chris Wraight. Click to enlarge. The second shot show Southborough’s Liz Holmes making her first of two goals in the game.

This was a tremendous game. The team played aggressively from the outset…Liz’s first goal was in the first minute which really set South Hadley back. And they never let up, all of them. They earned this win.

A HUGE part of this game was the fan support. From Principal Mead, Fran Whitten, several teachers, students, and parents, they were a very vocal and visible part of the game. It was very significant that this game was in South Hadley, their hometown, and we outnumbered their fans!

Worcester is a lot closer than South Hadley, so come out Saturday and support the team as they go for that State title.

You can see Liz’s two goals in this YouTube video … albeit from a South Hadley perspective. Coverage starts at about 0:22.

The usual great photos by Chris, and of course a GREAT win by our girls. And apparently they had to play against at least two boys on the other team? What’s up with that??

Thanks…they are brothers, and their sister is the keeper. We have played a few teams w/ at least one boy this year…but never two on the same team. Nothing illegal about it, in fact, outside the US, field hockey is a very popular sport for men. Europe, Australia, and especially in India. There, a gentleman by the name of Dyhan Chand is as legendary and revered as much as Pele is in Brazil.

@Wait..what: what do you mean? According to the law, they’re entitled to play. In fact, there are quite a number of male field hockey players across the region. Boys & girls playing together isn’t unusual – haven’t you ever been to Teamworks to watch the coed teams play soccer? From a blog on the topic:

Rule 43 of the Massachusetts Interscholastic Athletic Association guidelines is clear: ”No student shall be denied in any implied or explicit manner the opportunity to participate in any interscholastic activity because of his or her gender.”

Title IX says they can play. No person in the United States shall, on the basis of sex, be excluded from participation in, be denied the benefits of, or be subjected to discrimination under any education program or activity receiving Federal financial assistance.

Congrats to the Algonquin, and good luck at the weekend.