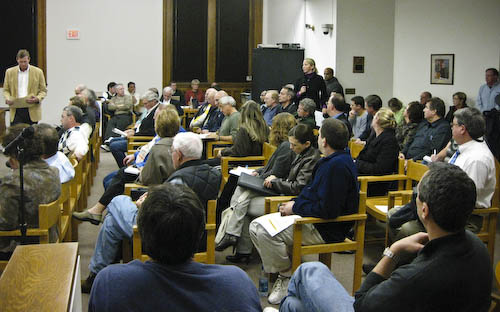 Above: It was standing room only at last night’s Board of Selectmen meeting

From behemoth EMC to the tiny mom-and-pop shops in town, members of Southborough’s business community turned out in force last night to protest last month’s decision to tax commercial property at a higher rate than residential property. In the end, Selectmen voted 2-1 to reverse their decision and return to a single tax rate.

The average Southborough family will pay $230 more in taxes this year. Under the split rate plan they would have paid $128 more.

The Hearing Room at the Town House last night was packed with business owners. All who spoke warned of dire consequences if a higher tax rate was imposed on businesses, consequences that included companies leaving town or going out of business, and landlords having a harder time convincing new business to move to town.

Selectman Bill Boland voted in favor of a single tax rate back in October. He maintained his stance last night. Selectwoman Bonnie Phaneuf, who had originally voted for a split tax rate, changed her vote to favor a single rate.

The lone hold-out for a split tax rate was Selectman John Rooney who argued that residents deserved a break after shouldering a disproportionate share of the tax burden over the past decade.

But the interesting thing was, no residents turned out to speak in favor of a lower tax rate for residential property.

“I haven’t heard any residents speak in favor of a split rate,” Southborough business owner Bill Depietri said. “If they’re so concerned, why aren’t they here?”

Selectwoman Bonnie Phaneuf said that while the board received a flood of feedback on the split tax rate from businesses, she didn’t get any calls from residents. “And that’s unusual because they call me about everything else,” she said.

So, Southborough residents, what do you think? Was the relatively small difference in the residential tax rate ($15.38 vs. $15.58) not worth fighting for? Did you agree with the business community that a split rate would hurt more than it helped? How do you feel about the tax bill you’ll pay this year?

Thanks for this update, Susan. I was there last night, and have two observations I think are worth sharing.

First, I just absolutely disagree with the notion, first raised by Mr. DePietri but later echoed by Mrs. Phaneuf, that it is somehow remarkable that no lay citizen chose to speak on behalf of the “residents” of Town on the tax rate issue. Isn’t that exactly what the BoS are elected to do? — represent the residents of Town? Especially on an issue on which the average lay citizen might be on unequal footing with sophisticated business people like those who were in the room last night. Indeed, after all the business folks said their piece one after another, Mrs. Phaneuf then said something like “OK, now is anyone here who wants to say something on behalf of the residents?” and I thought, wait, that’s your job! Which brings me to Mr. Rooney — one may disagree with his position last night, but the thorough preparation and conviction he showed when he spoke were a testament to what I’m talking about. He’s a keeper on the BoS.

All of that being said, my second, larger point is that our Town’s real challenge here is not the proportional tax rates, it’s the overall tax burden. We simply spend way too much as a Town, and the voters have only themselves to look to in order to correct that problem. On that I hope we can all agree!

Keep up the great work, Susan!

We have an unsustainable business model. Our employment costs are pretty much locked in a 3%+ increase every year and productivity in many areas is lacking and the rules are stacked against the tax payers. Adding to that is the specter of unfunded pension liabilities which may yet do us in.

The next 10 years will be very challenging and some old ways of doing business are going to have to change.

I am not, however, in favor of a split rate. The vast majority of the public services offered by local government are for the benefit of the residents as opposed to local business. If the residents are not willing to pay for them then we should cut back or do away with the service rather than stick someone else with the bill.

I am also not in favor of the split rate. If the tax rate is based on service use, then it should apply to everyone. The fewer town services that you use, the less you pay. Obviously that wouldn’t work, so I think it’s fair to tax businesses and residents at the same rate.

I would love to see our town be a more business friendly environment, and not just in the construction of office buildings, but businesses that actually provide goods and services to residents. I was dismayed to see that another cookie cutter office building will be going in across from the transfer station.

I also agree that at some point cuts need to be made. Many folks don’t get a 3% raise every year and many families have seen their incomes reduced significantly over the past few years. Perhaps that’s why not many residents showed up. It can feel shameful to admit that despite living in a nice house in a great town, you really don’t have an additional $230 in your budget.

I am also not a fan of split tax rate but I’ve got to tell you, Mr. Rooney made a compelling step by step analysis that made many of us in the audience begin to think. After the meeting many business owners were discussing the many valid points he made, and it was a discussion about the realities of our town and what is and isn’t fair. It is not about sticking someone else with a tax bill. He obviously spent many, many hours doing homework and we all came away understanding much more than when we went in, and I know a lot of business owners are glad he is there and glad he took the time to explain the issues. It is clear that the tax rate is not a major factor considered when businesses decide to locate and the deductibility of those taxes is skewed in favor of the business community. Also, there are many residents in our town that use the same amount of services as businesses, so the public school argument and town service argument is not as strong when viewed in that light. Since homeowner’s taxes have gone up 60% in the period of 02-09 and the commercial rate not nearly half of that (I don’t recall the number), the proposal was to minimize the impact on homeowners and seniors. It wasn’t trying to make someone pay more than they should. It was an education for many of us.

Don’t get me wrong, everyone agrees we need to cut, cut, cut spending. Unless that is done, which has not been done in many years (if ever), and since our tax base is not increasing, I no longer can just dismiss the idea that a split rate may not be an attractive solution to a problem that the town meeting residents refuse to deal with. We shall see in April.

I agree that the BOS are SUPPOSED to be representing the residents of the town… and why would residents feel like they HAD to come out if it was already voted on? It was in our favor… Shouldn’t the BOS have the backbone to support their own positions?

I’m all for more businesses in town to pick up their fair share of taxes… but as a resident, mine have basically tripled on my house since 2000 (less then 2800K/year to more than 8K/year). How much have their taxes gone up? I doubt that much due to the differences in how our properties values are assessed..

A huge problem I see in town is MORE and more building by tax-free “residents” of this town. Namely Fay School, St. Marks, etc. When a single resident pays more in taxes on their one home in town than Fay School “donates” to the town (I believe I read that Fay donated something like $6,000 year a few years ago, let’s hope it’s more now), something is seriously wrong. How much of the tax base is lost to “non-profits” that seem like they’re seriously making a profit? Especially when in their building frenzy, they’re removing yet more and more taxable properties off the tax base… How much did Southborough lose in taxes when Fay bought and built up all that land on Main Street (where it looks like they have their own little town now) and Middle Road, where the poor residents who actually LIVE on that road have been tortured for over a year or more now. How much land and buildings have been removed from our tax base in the last 5-10 years by these two “non-profits” alone? Do their properties like the golf course get taxed?

Maybe we should look at what Worcester was considering (not sure if it went through): all college students in Worcester to be charged a “surcharge” of $25 (?) a year to help subsidize the lost property taxes of the colleges they go to. Maybe we should consider taxing the private schools’ students that live in the dorms, and go to these schools? I don’t know the answers, but I do know that I don’t have an extra $230 in my stretched-too-thin budget!

I, too, greatly appreciated Mr. Rooney’s presentation on Tuesday evening. I attended to hear both sides of the argument. Though Mr. Rooney’s argument was very impressive and offered information I greatly appreciated, in the end I didn’t think the very small margin of difference was enough to balance the rift that a split tax rate might create in our community. We are all in this together and in my work on several town committees I have seen how much commercial property owners and small businesses contribute, sometimes without even being asked, especially those who also happen to be residents of the town. It is an example of “community” that I wouldn’t want to see disappear to have an extra $10.00 a month.

As for whom the BOS represent, I don’t agree that the BOS should speak alone for the residents of the town. First of all, a very large percentage of the small business owners in the room on Tuesday, asking the BOS to vote for a single rate, were also residents of the town. The BOS represent them as well. Democracy requires particpation. If residents cared enough about the issue they should have shown up, called a member of the BOS or sent a letter or email to the Town house expressing their concerns. The BOS asks for our input constantly and we owe them our support by letting them know where we stand if we want them to properly represent us. Our jobs are not finished once we vote them into office.

It was an interesting meeting and a very interesting discussion and I was glad I was there.