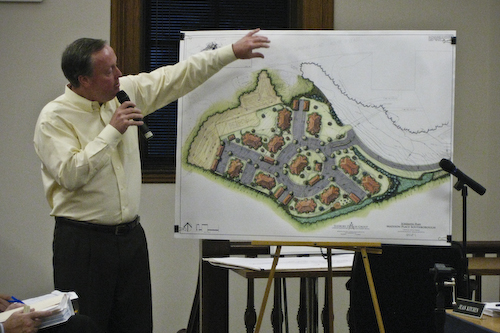 Above: Developer Bob Moss shares plans for his proposed 40B project at Tuesday’s Board of Selectmen meeting

Traffic, environmental impact, and water use topped the list of concerns Selectmen expressed this week about a proposed 140-unit apartment complex nestled between Crystal Pond Road and Route 9.

The project is a 40B affordable housing project, which means Selectmen have an opportunity to provide comments to the state as part of its site eligibility review.

Westborough developer Bob Moss told Selectmen the apartment complex – comprised entirely of 1-bedroom and 2-bedroom units – will be a “high-end luxury product” that will cater to high-tech workers. He listed the inclusion of a small office in each unit, as well as easy access to Route 495 and the Mass Pike as selling points.

Selectman John Rooney said he was most concerned about additional traffic on Route 9, as well as the impact on neighboring wetlands. Selectman Bill Boland said the complex could put a strain on the town’s water supply. He was also concerned about a lack of open space incorporated into the design.

Traffic to and from the complex would be routed down Crystal Pond Road. Moss told selectmen he does not plan on building an entrance or exit directly onto Route 9, but Fire Chief John Mauro Jr. said the single egress could be an issue.

“I have a concern about a single 24-foot driveway to service 140 units off a private lane,” Mauro said. “I will be looking for second egress … In a situation like this it’s imperative.”

Once officially notified of the project by the state – which Boland said should happen soon – Southborough selectmen will have 30 days to register any comments.

Moss said he expects the state’s site eligibility review will take about two months. If he gets their approval, the project will then go before the Southborough Zoning Board of Appeals for their consideration.