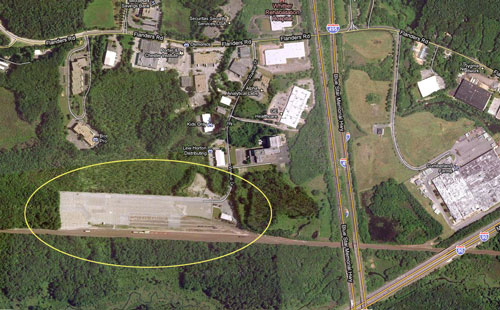 Above: Location of the proposed chemical transfer station (image from Google Maps)

The Westborough Board of Selectmen will continue its public hearing on the proposed CSX chemical transfer station off Flanders Road on Tuesday evening.

At a continuation in July, CSX officials attempted to assure the Westborough selectmen about the safety of the project.

In August the Westborough Planning Board said they would approve a permit for CSX to haul in 10,000 square feet of earth to the station and to move 2,000 square feet within the 22-acre site. Ten trucks an hour are expected to enter and exit the site while the earth moving is happening. Officials said none of the trucks will be routed through Southborough.

The public hearing is set to resume at 7:20 pm on Tuesday in the Selectmen’s Meeting Room in the Westborough Town Hall (34 West Main Street). You can see the full agenda for the meeting here. The meeting is open to the public.

See attached news report from last night’s, not so open, hearing of the Westborough Board of Selectmen approving plans for the CSX/ Transflo proposal on Walkup Dr.
Westborough Town manager and CSX representatives stated, he had meetings with Southborough Planning, Southborough’s Town Administrator, and Southborough’s Fire Chief and they were satisfied with what was being proposed.
Read between the lines regarding trucks going through Southborough.
FYI
There could be approximately 34 tank and rail cars containing hazardous materials at the rail yard being transferred onto trucks for distribution. Trucks will also bring collected hazardous materials to the yard for transfer onto rail cars. The average tank truck carries between 5,000 to 10,000 gallons of liquid. The average rail tank car holds about 30,000 gallons of liquid. If all the 34 rail cars containing hazardous materials were tank cars this would be over one million gallons of hazardous materials being trucked off the site alone. And what guarantee did the residents of Southborough get from this ongoing process?
“Every effort will be made by CSX to educate the truck drivers,” O’Connell said.
So much for due diligence on Southborough’s part!
I did attend the hearing with no opportunity to speak.

This is not the rest of the story.
Peter F. Phaneuf

WESTBOROUGH, Mass. – The Board of Selectmen voted to approve the site plan for CSX at 19 Walkup Drive.
Maurice O’Connell, vice president of government affairs for CSX, said they have received an order of conditions from the Conservation Commission and the earth moving permit from the Planning Board.
*** They also met with town officials in Southborough to discuss traffic concerns.***
***According to O’Connell, trucks will only be allowed to take a left onto Flanders Road. ***
***“Every effort will be made by CSX to educate the truck drivers,” O’Connell said.***
Town Manager Jim Malloy said CSX has been made aware of the town’s expectations.
“We’ve had a lot of meetings in which we have defined expectations and the fire chief said all this issues and concerns have been addressed,” Malloy said. “What we’ve done is we’ve prioritized what we will be using the funds for.”
The funds provided by CSX will go toward things like HAZMAT training for firefighters, installation of a traffic signal and an electrical height sensor for the existing railroad bridge on East Main Street.
The height sensors will “set off a device that will alert drivers in a better way that your truck is too high,” Malloy said.
One concerned raised by the Selectmen was the possibility of traffic at the site after business hours.
“The primary hours are 6 a.m. to 6 p.m.,” O’Connell said. “There are times when customers need to be serviced during nighttime hours.”
Molloy said the town has worked with CSX to address the issue.
“If the primary hours are 6 a.m. to 6 p.m. if there is a transfer after hours, the fire department will have to be notified by phone,” Molloy said.
Selectmen George Thompson acknowledged that the process has been a long one for everyone involved.
“I just want to thank everyone on the Planning Board and other department heads. This was a heavy lift,” Thompson said.
Selectmen Ian Johnson agreed.

You can read more in these articles: