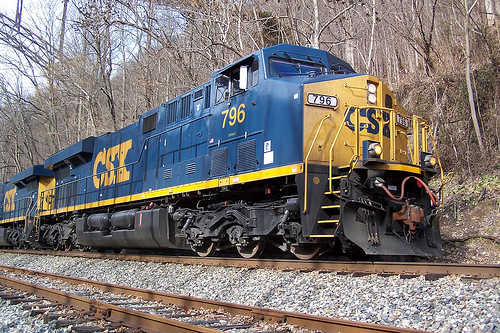 The Westborough Board of Selectmen voted unanimously on Tuesday night to approve the site plan for a new bulk transfer station on Walkup Drive off Flanders Road, paving the way for CSX to begin construction.

When it’s up and running the transfer station, which is located less than a mile from the Southborough border, is expected to handle a range of chemical materials, including 30% that would be classified as hazardous. As part of the project, CSX has asked to increased the number of rail lines at the site by ten. When things are up and running they expect about 30 trucks to pass through the site each day.

Westborough officials said all their concerns about the project had been addressed, but some Southborough residents weren’t so sure.

One person not happy with the decision, however, was Bonnie Phaneuf, the former chair of the Southborough Board of Selectmen. Phaneuf wanted the Westborough board to ask for public comments during the hearing. She noted that there were still concerns that Southborough officials had with CSX regarding rerouting trucks so they could not turn right onto Walkup Drive and continue into Southborough.

Nothing in the site plan specifically prevents them from doing so, but CSX said they would make “every effort” to educate drivers not to travel to and from the site through Southborough.

Although they declined requests to meet with the Southborough Board of Selectmen saying the town has no jurisdiction over the project, CSX officials said they were confident they had addressed the town’s concerns. Writes Westborough Patch:

On the positive side for Southborough commuters, the new facility in Westborough means CSX will have to send fewer freight trains into Boston, and that will open the tracks for an additional 20 commuter trains on the Boston-Worcester line come 2012.

For more coverage of Westborough’s decision, see these articles:

Gilmore Rd which is really close to this site already has traffic from the Sygma trucking company, it is used as a cut through to Westborough. Gilmore has a 15mph speed limit that trucks coming through rarely adhere to (and cars too- actually the cars are worse!). Guess it’s time to get the petition out and get a warrant put in for town mtg about making this already narrow road a “No Thru Truck” zone.

We tried this on Pine Hill Rd a few years ago. There are a number of State requirements that are necessary to meet. I believe that one is that at least 10% of the traffic must be trucks which requires a survey.

Just getting to Gilmore means they were driving unsafe and should be pulled over. Middle road is a no truck route even though the town seem reluctant to install the signs. Turning onto Parkerville from RT 9 is dangerous since it means blocking the right lane of RT 9 and turning into oncoming traffic on Parkerville. While travelling north to route 9 my wife was run into a snow drift last year by a truck that swung wide and fast and never stopped.
All this seems less like an issue of additional restrictions since trucks can’t read non-existent signs and speeders don’t care about limits. It’s more of an enforcement issue. Would additional patrols make a difference?
According to the Southborough Police Facebook page it looks like all you have to do is email them (tslatkavitz@southboroughma.com) and you can have the number of patrols increased in your/our area.

It’s hard to be optimistic because if the police don’t see the offence they can’t do anything about it and they don’t see it because we haven’t told them loudly enough and enough times where to patrol.