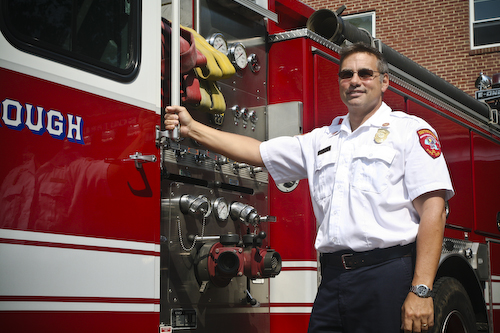 Above: Southborough Fire Chief John Mauro Jr. in front of the fire station

Fire Chief John Mauro Jr. said he always knew he wanted to be a firefighter.

“The bug bit me at an early age,” he said this week.

It might have been seeing the Southborough Arms burn when he was in seventh grade (“My mother took us to watch”), or the fact that so many of his family members were firefighters (his grandfather, his great uncle, his father, two uncles, and a cousin).

Whatever it was, Mauro signed up with the Southborough Fire Department in 1973 when he was just 15 years old, and hasn’t looked back since. That is, until this week.

On Sunday Mauro will retire from the fire department after a career that spanned 38 years. It’s something he admits to having mixed emotions about. “I’m going to miss the people here,” he said.

Mauro started part time with the fire department in the early 1970’s when he was a sophomore in high school. At the time there was only one full-time firefighter, and when he went out on a call, the station was left unmanned.

“When a call came in, if I wasn’t in school, I would get on my bike and ride down to the station to do dispatch,” Mauro said.

In 1982, after a brief stint working dispatch for the Southborough Police Department, Mauro – known to his friends by his boyhood nickname Pudge – was hired on as a full-time firefighter. He worked his way up to captain just four years later, and in 2000 was appointed chief.

Mauro remembers a time when the fire department, comprised largely of volunteers, was one of the main social organizations in town. He talks about the annual Fireman’s Field Day, “a 4-hour event that took six months to plan.”

“There was a sense of community,” he said. “It was great.”

But it wasn’t all social. Mauro said looking back on his career there are the calls that will always haunt him. “You try not to bring it home with you,” he said.

In 1982, just after he was hired by the department full time, Mauro was first on the scene of a bad accident. A car had hit a tree on Cordaville Road. Mauro recognized the car and knew right away it was his friend Southborough Police Officer Steve Purcell, a husband and father of five.

“I did CPR on him all the way to the hospital, but he didn’t make it,” Mauro said. “You think as a young EMT you’re going to save everyone.”

More recently there was the crash that killed 17-year-old Shauna Murphy and her 15-year-old sister Meghan. Mauro was one of the ones who had to break the news to the girls’ parents. “It was horrible,” he said.

Since the Murphy sisters’ accident, Mauro – whose own daughter was a freshman at Algonquin at the time – has become involved in safe driving programs at the high school. It’s one of the things he’s proud of about his time with the department.

Mauro lists upgrading the town’s ambulance service to a paramedic level and purchasing the new ladder truck as other major achievements during his time at the helm. But ask him what he’s most proud of, and the chief will say, “that during my tenure my firefighters went home safe every night.”

The chief is quick to laugh and shares an easy camaraderie with the firefighters under his command. “We’re going to miss him,” Captain Joe Hubley said this week. Hubley started with the department just a few years after Mauro and they’ve worked together for more than two decades. “He’s going to be hard to replace.”

At 53 Mauro knows he’s young to retire, but he insists the time is right. “I’ve seen too many friends and colleagues spend too long in this job,” he said. “There are a huge number of challenges and a huge amount of stress.”

Mauro said he won’t miss the “endless night meetings dealing with budgets” but admits the department will remain a part of his life even after he retires.

You are one of the great ones! Congratulations! Enjoy every single minute of your retirement, you deserve it.

Pudge, I continue to admire and respect you.You are an authentic American hero. Wishing you a new adventure as you turn the page.

Congrats on your retirement! We have a place for you not far away. Come on over!