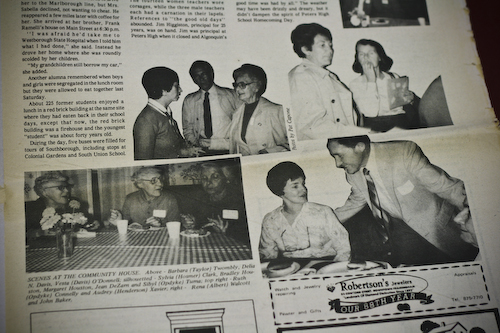 Above: Peters High alumni featured in the pages of the Southborough Villager this week in 1981

Each week we take a look back at the top stories reported in the Southborough Villager 10 years, 20 years, and 30 years ago. Here are the stories that were making headlines during the week of September 26. If you have memories about any of these events, please share them in the comments.

10 years ago: Collecting for 9/11 and Southborough secessionists
Students at Algonquin and Neary launched collection drives for the victims of 9/11, pouring their allowance money into 10-gallon jugs and asking the community for additional donations. Meanwhile, the what-to-do-about-Algonquin debate heated up as a group of parents organized Southboro Solutions, a group that lobbied for a separate high school for Southborough. (Southborough Villager, September 28, 2001)

20 years ago: Sexual abuse conviction for Southborough father
Southborough resident Thomas Bates, 51, was sentenced to more than 30 years in prison on charges he sexually abused his five adopted children. He was convicted of 31 counts of sexual abuse and pornography, including four counts of child rape. The children’s mother said on the stand she “could not recall” the incidents. (Southborough Villager, September 26, 1991)

30 years ago: Peters High School reunion
The Southborough Historical Society hosted a reunion for graduates of Peters High School. More than 330 graduates from as far away as California made the trip back to Southborough for the event held at the Community House and other venues around town. The oldest living graduate at the time, Mrs. Hazel Burke, 91 years, was one of the attendees. She graduated in the class of 1908. (Southborough Villager, September 25, 1981)

This guy should have got the electric chair.Or better yet a slow and painful death. That would be a great deterent to others who contemplating this kind of abuse. Is Bates on the Sex Offender Registry? And is he still in town or where does he live now so we can be aware. There is one donw the street on Parkerville that is 71 and still lives and visits his residence.

What ever happened to the sex offender bill that Chief Webber was working to get passed? If I remember correctly it was passed at town meeting. Is that guy on Parkerville Road close to the schools or the new playground?

Under the new restrictions, sex offenders cannot take up temporary or permanent residence within 1,000 feet of schools, daycare centers, bus stops, parks, recreational facilities or elderly housing. They will also be restricted from loitering near those places.

The article said the restriction covers about 90% of the town, but that the bylaw did not impact those who were already living within the restricted area when it was passed.

yes, and this is public information, available at the police station, He is just before Hubley on that dead end street same side. And I do see him walking. The police I beleive told him he could not walk this way toward Finn. He has to stay I beleive 500 yards from schools. Everyone should check the sex offender registry. THere are several in town and working in our town. ANd, those are only the ones that have been caught. So know where your children are at all times.

Good point. We need to be diligent every second for the safety of our children. It is shame we have to be so careful but I would rather be careful than have something happen to one of them especially at the hands of one of these creeps. Always a good reminder.

Note: The Trottier late bus drops off the kids right across the street from that house.

Is that the same person that was convicted in 1991?

Looks like Bates lived on Southville Rd. Someone else is at the Parkerville Rd house, another level 3.

Still, I hate that the late bus drops off right there.