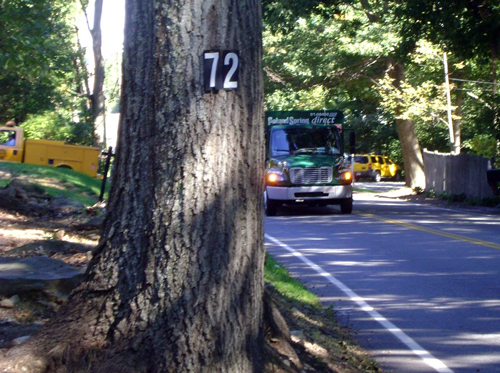 Above: The tree at the center of the debate (photo via treehazard.blogspot.com)

When a Marlboro Road family petition a year ago to remove a tree at the end of their driveway because they said it was a safety hazard – and when the Board of Selectmen voted not to cut down the tree – the story elicited strong response from many of you. Despite the no-vote, the family didn’t give up their effort, and last week they convinced the Board of Selectmen to change its mind.

Bill and Melissa Shields argued the 120-year-old red oak tree created a hazard by blocking the view of oncoming traffic from their driveway. In particular, the Shields said the tree kept school bus drivers from noticing their young children at their bus stop. It was not uncommon for the bus to drive on by without stopping, they said.

The Shields presented selectmen with letters of support from from Police Chief Jane Moran, the school system, and State Representative Carolyn Dykema. But what proved crucial in reversing the board’s decision was a legal case that had nothing to do with Southborough.

(Selectman John Rooney) said that, but for one new fact that emerged in the last year, his opinion would have remained the same. Pointing to a recent legal case in Pepperell, he said towns can now be held liable for accidents that happen because of line-of-sight issues stemming from trees.

Previously, he said the liability only applied to instances in which some form of the tree or its branches were physically in the road.

“That’s a significant change,” he said, and it suggests the town could be on the hook if an accident did happen there.

In the end, Selectmen Rooney and Dan Kolenda voted to remove the tree, while Selectman Bill Boland dissented. No word on when the tree will come down, but the Shields family has agreed to pay for its removal.

What do you think? Did the Selectmen make the right call? What about the precedent – good or ill – this decision sets? Share your thoughts in the comments.

Nice work by our Board of Selectman on this issue. Kid’s safety = no contest. case closed.

This should have never gone on as long as it has. Fire up the chainsaw.

Saddened. The tree is perfectly healthy and for those of you who have a child on the school buses in town, how many times have they stopped even when they don’t see your child. Time to get real. The only positive here is that they will pay to remove it. If you don’t like trees (I am willing to bet it was there before they moved in) then MOVE.

listened saddened – trees can be murderers, most of them are perfectly harmless, but that one in one trillioin ‘bad tree’ just has to go. – get over it.

This ruling shows that Southborough is truly working towards a safer community. To put the interests of a tree before the safety of a child, would have been ridiculous. These board of selectmen made the correct decision.

I think it’s the right thing to do….the town should pay for its removal as well….it’s on town property AND it’s a safety hazard!

That’s how we back pedal Rooney !!!! DON”T BLAME ME !!!! I miss Sal at least he stood up for what he believed in. Now the town should pay for the tree to come down. Who should we call FLIP FLOP ?

I am a little late to this situation. Can someone explain the rules for town easement/right-of-way? I assume the situation is because the tree is at the street and that the town has control over some number of feet at the roadside?

If the street is reasonably new the town typically owns 25 feet from the center line of the road (about 12 feet from the edge of the pavement) . I believe that utilities are granted easements to install their pipes/wires/fiber etc on the town owned lands.

Assuming the above facts, the town owns the tree in question.

Here is what I know. A developer built a road next to mine as part of a development in my neighborhood. He needed a 50 ft corridor the road is about 25 ft wide. I went to a lot of planning board meetings and recall that the current standard is 25 ft from the center line of the road. A lane is about 12 -13 feet wide leaving about 12 feed from the edge of the road. I know where the property markers are on my lot and 12 feet seems about right.

The town owns this land (fee simple) and can do what it wants there is no right of way involved. Most of us maintain the property on our frontage even though we do not own it because it is in our interest but we do not own it.

I guess I am at a loss on this one…I have been a property owner in various states for the last 34 years and have never heard of a situation like this. My understanding of the law and property ownership has always been that the town has the right to do maintenance in that easement, but that the property owner still actually owns that land. The tree is on the Shield’s property, town easement or not. Does this now mean that I would have to go to the BOS to remove a tree on my property if it is within the town’s easement? How utterly ridiculous! And of course the Shield’s should pay for its removal…it is on their property! Just because the town has an easement and can use that part of someone’s land should not mean that they own it…if that is the case, then that means the town should perform the upkeep of those extra 12 feet. Does that mean that if someone gets hurt on those 12 feet that the town would be held liable and not the property owner? Oh, the Pandora’s box that is opening with this situation…where is the common sense in this? I can assure you that if I had a tree that was dangerous to my family and/or the community that was on my property, even within the town’s easement, it would have been cut down without hesitation…because who knew I would need the permission of anyone? Sorry, I really don’t get it…does this mean that I cannot plant a tree within that 12 feet? Ooops, not only have I done that, but the developer of our neighborhood was required by the town to do just that! I understand that the town can come in and cut down those trees if they are in the way of something the town needs to do, but for me to have to get permission to do the same is beyond belief. Hmmmm…another thought….am I paying taxes on those 12 feet? Since I believe I am, then I should be able to do whatever I need to that is within zoning regulations. This situation really defies sensibility.

If common sense reined in this town then………

There would be no rah rah speeches at TM to pass a school budget.

A long time business in town would not be harassed and almost driven out of business by the zoning board.

A prospective buyer to a closed farm stand would be welcomed with open arms to reopen the stand.

This never should have gone so far. What bothers me most are the games that were played by the BOS to get to this decision. I hope I am never in a position to go in front of the BOS to take a tree down because of a safety issue. ALL I have to do is go back to my original post in 2010 – the Chief of Police told the BOS it was a safety hazard. (The Head of Public Safety for the town of Southborough) The case should have been shut + closed back then. When I moved to Southborough, I had no idea of the “small town” politics that took place. Southborough is a great town, but you have to wonder what are the motivations of some BOS that they would give the Shields family such a hard time over such a simple issue. Unfortunately this is not about the tree at all. Good luck to the Shields family, I am glad you guys stuck to your guns, justice prevailed. Now fire up the chain saw!

Mike Jr: You are correct that I did indeed change my vote. Political expediency will always be secondary to doing what is in the best interest of the town. Of course, whenever someone tries to do the right thing, it gratifies some and astonishes the rest. I accept your astonishment.

I’m surprised at how many people just immediately conclude that this has anything to do with child safety. Its just the easy argument to get support for their cause and you all bought in, I’m embarrassed for you. If anything having a large tree next to your driveway would protect the kids. I have similar trees (actually bigger) on my property and I love having them there.

I’m with Mr. Rooney on this one, these people would clearly sue the heck out of the town if something ever happened, so better safe than sorry, even if it is the wrong thing to do.

If this is not a child safety issue, then what, in your opinion, is the issue?

Can I have the wood to burn. Looks like a long winter is coming and my wood stove will be burning away.

I agree with Lisa:
I think it’s the right thing to do….the town should pay for its removal as well….it’s on town property AND it’s a safety hazard!

Good decision!! I would hate to go in and out of that driveway with that tree there! It is right after the rise of Rt 85 South after the split from Framingham Rd and the cars move along at a pretty good clip.

I honestly don’t understand the obsession with keeping trees pinned next to roadways around here. I came from a lovely suburban area of upstate NY. They kept trees at least about 10 feet or more away from roads, though trees still attractively lined the streets. A roadway akin to Rt 85 would have a shoulder adjacent to the road with a width of at least two feet, then trees were set back from there. It was much safer that way with icy roads or other unexpected situations. Sightlines were vastly better, and fewer trees affected power lines. Bikers and joggers would have space to bail out as well.

I am very glad for the Shields family. I feel that they should have the ultimate say in the matter. I love trees, but there are better places for them than that.

Why did this take so long? Is this tree an endangered species? Don’t we have enough trees in Southborough that this one wouldn’t be missed? It should have been taken down by the homeowners (since it was healthy) without getting this far. “Ridiculous!”, as Judge Judy always says…

And I agree with the above poster about the long-time business owners getting harassed… just wrong. We can all do better.