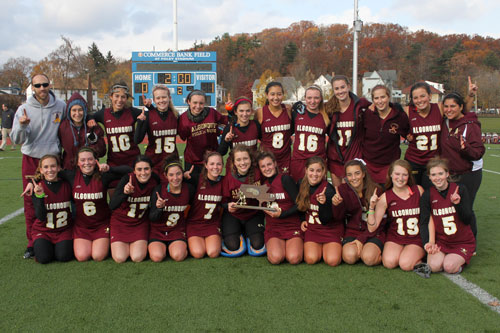 For the second year in a row, the Algonquin field hockey team has captured the Central Division 1 championship, with a narrow 1-0 win over Wachusett this afternoon. The game was scoreless until sophomore Maggie Wraight from Southborough scored the game’s only goal with just over a minute left to play.

The girls now go on to the state championship tournament for only the second time in their history. Last year they lost in the state finals to South Hadley. On Monday they’ll face the West Division 1 champs – either Longmeadow or Agawam – in the state semifinals. The game starts at 7:00 pm at Foley Stadium in Worcester.