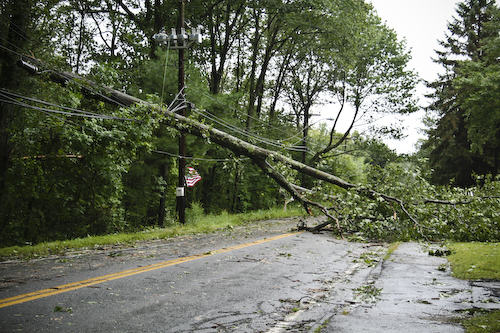 Above: A tree down on Cordaville Road had power knocked out for days after Tropical Storm Irene

With two extended power outages in as many months this fall, Southborough residents have had some strong words for National Grid. Next week they’ll get to tell officials exactly how they feel at a public hearing at Trottier.

The hearing, organized by the state’s Department of Public Utilities in the aftermath of Tropical Storm Irene, was originally scheduled for November 1, but had to be rescheduled because Trottier was without power thanks to the October Nor’easter. Oh, the irony.

At the rescheduled hearing next Tuesday, the DPU invites public comment about National Grid’s response both to Tropical Storm Irene and the snowstorm.

About 90% of Southborough residents were without power following both Tropical Storm Irene at the end of August and the Nor’easter at the end of October. Many in Southborough were in the dark for multiple days, and there was no shortage of frustration on the part of residents and emergency responders.

“Is national grid managing this like amateurs or is it just me? I am not convinced that National Grid has done all the necessary preventative work to reduce these outage incidences,” one My Southborough reader wrote on Facebook after the October storm. “We as paying customers need to band together to demand year round services and let them know that poor emergency services just will not do it!”

After Tropical Storm Irene, then-Fire Chief John Mauro Jr. said his issue was with the lack of information the town received from National Grid.

“The only important player missing (at the town’s Emergency Operations Center) was the utility,” Mauro said in September. “We had very little communication from them. We weren’t getting answers.”

Mauro said the lack of information from National Grid made it difficult to make decisions about public safety in the aftermath of Irene, including how long to keep emergency shelters open and whether to evacuate high-risk residents from developments like Colonial Gardens.

The public hearing starts on Tuesday, November 29, at 7:00 pm at Trottier Middle School. The announcement doesn’t say where in Trottier the meeting will be held, but I’m assuming the auditorium. I’ll let you know if I hear differently.

So, will you go? Now that a few weeks have passed, are you still as worked up about National Grid’s response? Or were you never that upset to begin with? What would you like National Grid to know and what questions would you like to get answered? Share your thoughts in the comments.

I personally would like to know what their plan was. Seemed to me from the October Nor’easter that NG learned absolutely nothing from their experience with TS Irene in August. I myself am extremely concerned about this coming winter if the past 2 storms are any indication as to what is to come from NG we are all in for a very long, very dark, very cold winter!!! If you don’t have a family preparedness plan in place yet, now would be a good time to create one. Ready.gov and our towns own MRC and CERT website I think has links about being prepared. But first and foremost I hope residents attend and get just as riled up about the current state of our electric service as we are getting over the closing of the swap shop!!