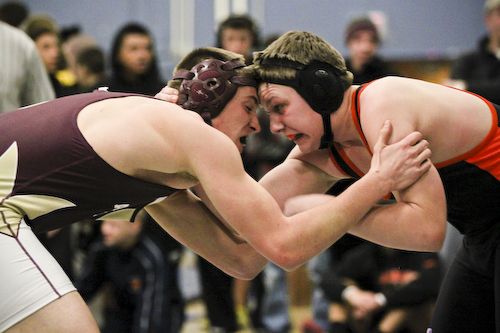 Above: Algonquin’s Mike Ryan (left) faces off against his opponent (photo by Katarina Wrin)

By all accounts, the Algonquin wrestling team, under the direction of new coaches Brian Kramer and Derek Grant, is off to a great start this year.

The team opened its season last month with a dual meet against Tyngsboro. My Southborough reader Beth reports Algonquin was behind in team points, but managed to come on strong in the upper weight classes and notch the win at 47-30, with wrestlers Carter Guzzi, Matt Cofer, Alex Mazzola, and Chris Gwyn all beating their opponents.

Later in the month Algonquin wrestling competed in the annual Holiday Wrestling Tournament at Framingham High School where they placed 15th in the two-day tourney. My Southborough reader Katarina said after the first day Zach Marcoulier (138 lbs) and James Officer (285 lbs) were 2-0, and several other wrestlers were still in the tournament with just one loss. Friday morning action knocked out most of the remaining Algonquin wrestlers, except Zach, James, and Chris Steidler (126 lbs). The tournament ended with Zach and James placing second in their respective weight classes, and Chris placing eight in his.

There’s lots more action to come this season for the wrestling team, and supporters say several wrestlers are poised to go on to the post season. You can visit the Algonquin wrestling website at arhs-wrestling.com to follow along.

good luck tonight against Quabbin ! lots of fun to be had. go ARHS WRESTLING