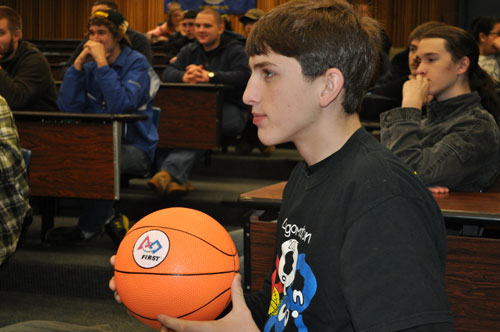 Above: Members of the Assabet Robotics Team learn about the season to come (contributed photo)

The Assabet robotics team is ready to start building, having kicked off their season this weekend. Here’s a press release from Assabet with more information.

Dozens of students and mentors crowded into the Assabet Valley Regional Technical High School’s Lecture Hall on Sunday, January 8th, to find out what this year’s FIRST competition will entail. FIRST (For Inspiration and Recognition of Science and Technology) is a program started by renowned inventor Dean Kamen that encourages students to problem solve, think critically, and use their creative genius to conceptualize, design, build, test, and learn to drive a remote controlled 120 pound robot that will compete in teams against other robots.

This year’s game design involves robots shooting foam basketballs through openings of various heights, zipping over speed bumps, and balancing on a teeter-totter ramp, all in a two minute match. Within an hour of learning the game’s objectives, groups of students were presenting their initial brainstorming ideas to the gathered crowd. The Aztechs will be meeting three times weekly through the build season, which will end on February 21st.

Marcus Fletcher, Project Manager for the Aztechs, graduated from the school in 1999 and has been a mentor every year since.

“Once you get hooked, it’s hard to think of anything else as that first weekend in January hits. This school, and this program, gave me so much that it’s great to be able to give back a little,” Fletcher said. “Last year was my first time at the helm, and we were certainly competitive, but we hope to be even better this year. There’s a lot of luck involved, but we pride ourselves on building as much in house as possible, and letting the students drive the design process. We’re competing at the Boston and Manchester Regional events and hope to see a huge crowd out there wearing our signature blue and gold.”