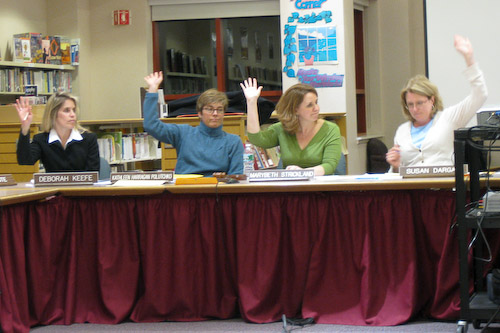 Above: Susan Dargan (far right) has decided not to seek another term on the K-8 School Committee

The Metrowest Daily News today gives us a peek into what the upcoming town election season might hold. Candidates were able to start pulling papers last week, and many incumbents have already done so, but one has said she won’t run again.

Bill Boland’s term on the Board of Selectmen comes to an end this year, but it appears he plans to seek re-election. Boland has already pulled papers, but could not be reached by the paper to confirm his plans.

To find out who else is looking to throw their hat in the ring for another term, check out this article by the MWDN.

Correction 1/18/2012: In the original version of this post I wrote that Marybeth Strickland said she would run again. I got it wrong – she hasn’t announced her intentions either way. Apologies for the mistake.

One can only hope that individuals who are interested in both education AND the interests of taxpayers are elected. I trust that they will pay attention to the comments and analyses of posters like Al Hamilton and John Rooney.