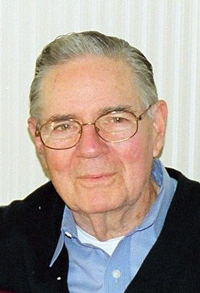 Richard P. ‘Dick’ Curran, 82, of Southborough, died on Friday, January 27, 2012 surrounded by his family. He was the devoted husband of Eileen (Henry) Curran for the past 50 years. Born in Framingham, he was the son of the late William and Katherine (Brady) Curran.

In 1947 he graduated from St Mary’s High School in Milford and shortly after enlisted in the Navy. He was stationed on The USS Tarawa during the Korean War and travelled all over the world, crossing the equator twice. Upon returning from the war Dick bought The Southborough News and Coffee Shop, affectionately called “The Spa”, from his aunt and uncle. There he met his wife Eileen, and they married in England in 1961. Dick spent many happy years at The Spa until he retired in 1986. He was an active member of St. Anne Church in Southborough. He also served on the Board of Southborough Senior Center, was a past president of the Southborough Rotary Club, volunteered at the local schools and was a member of the Knights of Columbus, Phil Sheridan Council.

In addition to his wife he is survived by his children, Margaret Curran of Arlington, VA; Mary Curran-Garrett of Southborough; Clare Curran-Ball and her husband David of Northborough; 4 grandchildren, Kristie MacDonald and her husband Christopher, Thomas Cadrin, Steven Garrett and Caitlin Ball; 2 great grandchildren, Tallin and Jaxson MacDonald; and many beloved nieces and nephews.

He will be remembered especially for his gentle grace, his caring heart, his wise counsel and his wonderful sense of humor.

He is pre deceased by his brothers, Eddie and Bo Curran.

Memorial contributions may be sent in his memory to Sisters of Saint Joseph of Boston, Office of Mission Advancement, 637 Cambridge Street, Brighton, MA 02135. To send words of condolences to the family, please go to www.Morrisfuneralparlor.com.