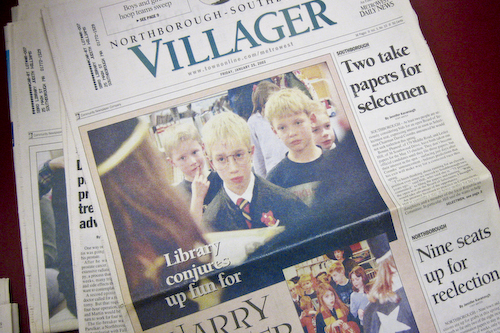 Above: The front page of the Southborough Villager, January 25, 2002

Each week we take a look back at the top stories reported in the Southborough Villager 10 years, 20 years, and 30 years ago. Here are the stories that were making headlines during the week of January 30. If you have memories about any of these events, please share them in the comments.

10 years ago: Library conjures up fun
With the fourth installment of the series on bookshelves, Southborough kids had a bad case of Harry Potter fever in 2002. When the library held a Harry Potter day, devotees participated in a trivia contest, made Harry Potter-themed crafts, and solved riddles and puzzles just like their favorite character did at Hogworts. Several kids attended the event in costume. The Villager reported there was one Hermione and about five Harrys, along with a Ron and a Draco Malfoy. Librarians were thrilled. “It has motivated a lot of children to read…We can’t keep it on the shelves,” assistant children’s librarian Denise Kofron told the paper. (Southborough Villager, January 25, 2002)

20 years ago: Enrollment increase will cost schools
School enrollments in Southborough may be on the decline now, but in 1992 it was quite the opposite. Early budget discussions by the K-8 School Committee centered around hiring two new teachers to accommodate the more than 40 additional students that were expected to join the district in the upcoming school year. (Southborough Villager, January 30, 1992)

30 years ago: Fire Chief Brock appoints son as captain
Fire Chief Brock found himself the center of controversy when he promoted two firefighters to the position of captain. One of the men promoted was his son Dan Brock. Unlike police department promotions which are made by the Board of Selectmen, promotions within the Fire Department are made at the sole discretion of the fire chief. Still, in an editorial the Villager suggested Brock should have left the decision up to selectmen anyway. “One of the men he appointed is his son, a fact that unnecessarily confuses the issue of qualifications with that of nepotism,” the Villager wrote. “Brock could have spared himself the embarrassment if he could have entrusted the choice to the selectmen.” (Southborough Villager, January 8 & 22, 1982)