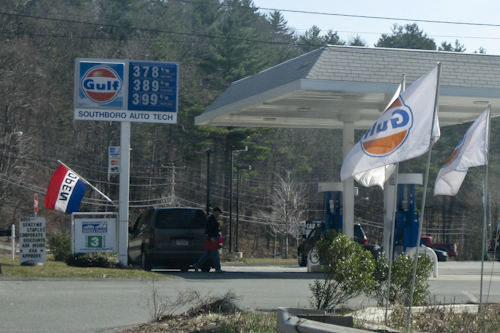 There has been no shortage of talk lately about the rising cost of gas. According to AAA Southern New England, the average price for a gallon of unleaded in Massachusetts this week is $3.739, up 2 cents from last week and 13 cents from a month ago.

So where is the cheapest place to get gas in Southborough? As of Tuesday afternoon when I checked, there was a 26 cent spread between the lowest and highest prices in town. Only one station – the Gulf station on Route 9 west – was below the state average for a gallon of regular unleaded. Here’s the round-up.

(Note: These are the base prices listed on the roadside sign for each station. Some may be cash-only prices, with higher rates for credit cards. Prices do not reflect loyalty card discounts offered by some stations.)

The Gulf at 365 W Turnpike Road (9 West) has rebranded to a Cumberland Farms station. I assume this might be related to a managment change. I recall there is some talk to have that station completely upgraded in the near future as well. I assume the re-branding (cumberland farms owns Gulf Oil, so not much has really changed) is part of the reason that station is undercutting the market, for now.

Once they get a following/change consumer behavior they will probably come back up to match the Gulf across the turnpike on 9 East. The want people to think Cumberland Farms = Cheapest Gas. Once we have that drilled into our heads, we go back on auto-pilot and stop shopping around. That’s when they’ll creep back up to the average.