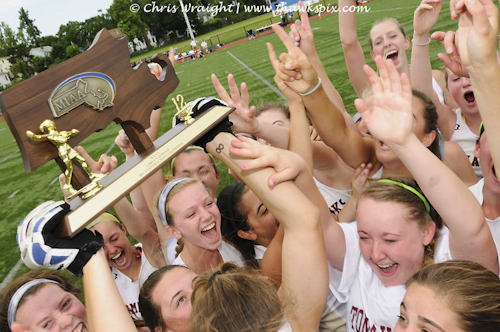 Above: The Algonquin girls lacrosse team celebrates their district championship on Saturday (photo by Chris Wraight)

(And I just learned that the Algonquin boys and girls track teams also had great success at the New England championships in Saco, Maine this weekend, to boot.)

The top-seed Algonquin boys lacrosse team was trailing at halftime against 3rd-seed Grafton in the Central Division 2 finals Saturday at Foley Stadium, but the team rallied in the second half to an 11-9 victory. That makes back-to-back division titles for the T-Hawks. The boys move on to the state semifinals on Tuesday where they’ll face Western Division champs Minnechaug Regional. The game starts at 7:30 pm at East Longmeadow High.

For the girls lacrosse team, it was all about redemption. Algonquin faced Westborough in the division championships last year and lost. In fact, before this season Algonquin had not beaten Westborough in girls lacrosse in five years. But this year was different. After two regular season wins against Westborough, Algonquin pulled out a 7-5 victory against their rival in the Central Division 1 finals on Saturday. The girls now head to the state tourney with a semifinal match against Longmeadow on Tuesday at 5:30 pm at East Longmeadow High.

The Cinderella story of the season belongs to the Algonquin baseball team. The boys were ranked last going into the Central Division 1 playoffs, but last night they shocked top-seed St. John’s by wining the championship 2-1. Algonquin will face Western Division champs Westfield in the state semifinals on Tuesday at 7:00 pm at Szot Park in Chicopee.

Southborough photographer Chris Wraight (www.thawkspix.com) was at both of the lacrosse games this weekend and sent along this batch of photos. Click an image to enlarge.