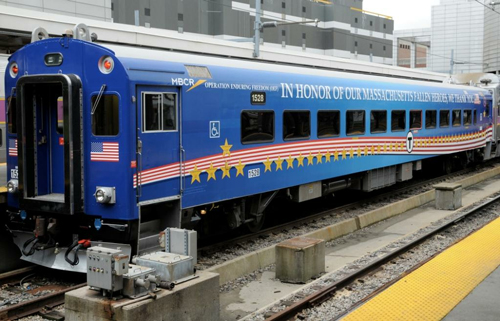 Above: Above: The Gold Star Memorial train at its unveiling at South Station last month (contributed photo)

This is short notice, but earlier today I learned the Gold Star Memorial train will make a stop in Southborough this evening. The special passenger coach which bears the name of every soldier, marine, sailor and airman who lost their life while serving in Iraq and Afghanistan, was scheduled to pass through town last week as it traveled the Boston-Worcester line, but the run had to be scrapped at the last moment due to mechanical problems.

Mass Bay Commuter Rail says the train will leave Worcester headed inbound at 4:55 pm, putting it in Southborough at 5:21 pm. It will stop at the Southborough Commuter Rail station to let off and take on passengers, and then head on its way into Boston.

Seeing this train tonight was by far the most humbling 2 minutes I have ever spent in my life, it took my breath away to see the names of our Massachusetts Fallen and knowing somewhere is a family whose life will never be the same again. I said a quick prayer for them all and their families. It was also nice to see our Citizens come out and show their support for these Hero’s we will never meet and to see the flags waving as it pulled into the Station, Thank you Susan for making it possible for us to see it, it was a moment that will be forever etched in my mind and heart.

I am so sorry I missed this. I would love to have taken my kids. Thank you to all the service men and women who have given their lives for our freedom and thank you for all of them who also continue to fight for our freedom. We are all blessed!

The train is coming through again! It’s attached to the 4:05 out of Boston. We should arrive in Southborough a little later than the normal 4:53pm because of heat restriction on the tracks. If your there around 5pm you get to see it for 30seconds!

Thanks for the update, unfortunately, got your note to late. But please if you see it again let us know, I would like to see it again.

The train is coming through again! It’s attached to the back of 4:05 out of Boston. We should pass through Southborough around the normal 4:53pm arrival. If you’re there around 4.50pm you’ll get to see it for 30seconds! I’m guessing it will turn around and come east again, but I don’t know when or if that train is scheduled to stop at the Southborough station.