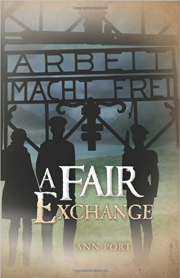 In her recently-published third novel, Southborough author Ann Port takes a turn at historical fiction. A Fair Exchange is a novel and mystery set in Munich and Dachau during World War II. Here’s the summary:

The oath Erich Riedl once eagerly recited as a member of the Hitler Youth now haunts him as SS Commandant Mueller declares: “You will immediately join the SS Death’s Head Unit at the Dachau detention facility, where you will assist with Luftwaffe experiments…” Suddenly the tedious supply problems Erich was struggling to solve seem preferable to a post in a camp he knows little about, but intuitively dreads. Hoping to drown his anxieties in beer, he joins his friend, Joachim Foerster, at the Hofbrauhaus. There he first meets Inge Friedrich, a dedicated reporter for the Völkischer Beobachter, the propaganda mouthpiece of the Third Reich.

Despite years of relentless indoctrination, Erich, Inge, and Joachim must learn to trust one another with life-threatening secrets. Extraordinary circumstances force them to join together, facing danger and possible death as they strive to accomplish a seemingly impossible task. All the while the reader wonders: Will they succeed in their quest or die at the hands of the brutal Gestapo? Will their innate principles prevail over Nazi ideology? Can friendship survive or love develop in the cold, brutal world of the Third Reich?

A Fair Exchange is a thrilling page-turner for readers who enjoy historical fiction, mystery, and political intrigue, as well as for those who are both fascinated with and appalled by Nazi Germany.

, along with Port’s first two novels It’s All In The Title

and The Bernini Quest

, are available on Amazon in paperback and Kindle editions.