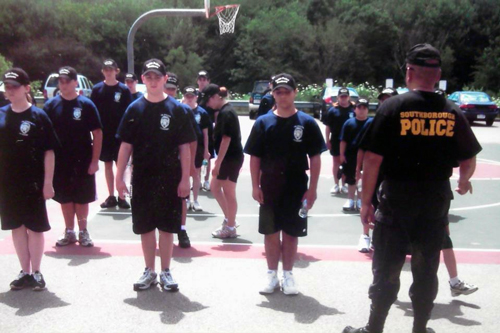 It’s a week of drills and challenges, from physical fitness to public speaking. Orders are barked, rules are meant to be followed, and lessons are learned. At the end, members of the Southborough Police Department hope it’s a week that changes some lives.

The week-long academy, which takes place at Trottier Middle School, has been offered nearly every year since 1998. Run in a paramilitary style, the camp is aimed at youth ages 12 to 15.

Officer Kevin Landry, who along with Mattioli, has been involved with the academy since its inception, said the program isn’t just for kids interested in becoming police officers or joining the military.

“We’re not teaching kids how to be police officers,” Landry said. “We’re teaching them leadership, teamwork, and responsibility.”

The camp seems to leave a lasting impression. Mattioli said a good number of kids return to the program year-after-year. When they age out, some return to volunteer as team leaders.

Both Mattioli and Landry have stories of the lives they’ve touched through the program year after year. Like the nonathletic kid who got the courage to climb a rock wall with his fellow cadets cheering him on. Or they shy kid from a dysfunctional family who volunteered to stand up before his peers to give a speech. Or the parents who were shocked when their son came home and cleaned his room without being asked. (“Parents love the program,” Landry said.)

In addition to drills, obstacle courses, and the like, the cadets learn about special topics like international terrorism, crime scene investigation, Internet safety, and self defense.

The academy is run by Southborough police officers who volunteer their time and expertise. Other costs are borne by the Southborough Police Association.

For information about how to register contact Officer Landry at (508) 485-2147 or klandry@southboroughma.com.

This is the best progeam ever. Thank you to officers Landry, Mattioli, Maida and countless others who volunteer their time to make sure this happens. You are all heros in the eyes of the kids.

This sounds like a fantastic program, I had not heard of it before. I imagine this has a very positive effect on all who participate. Thank you Officer’s Mattioli and Landry!