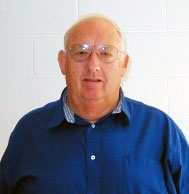 Retired Southborough Fire Safety Officer Jack Peltier, 71, died on Sunday after a sudden illness, and his death is being mourned not just in Southborough, but in fire houses across the nation.

Peltier, along with colleagues Lt. Jim Colleary and EMT Cindy Bechtel, was honored with a service award just last week at the Board of Selectmen meeting. Fire Chief Joe Mauro said Peltier could not attend the ceremony because he had been hospitalized. Peltier’s son Jim, a lieutenant in the Southborough Fire Department, accepted the award on his father’s behalf.

“Jack brought a wealth of knowledge to us,” Mauro said, noting he was instrumental in the town’s effort to purchase a new ladder truck in 2009.

Peltier was perhaps best known nationwide as the quartermaster of the hands-on training of firefighting drills at the Fire Department Instructors’ Conference when it was located in Cincinnati.

“One of the things I most admired about Jack is he wouldn’t take sh**from anyone,” said long-time friend and colleague, Harry Carter. “He wouldn’t do anything half-assed. It was done the right way the first time, or it wasn’t done at all.”

Peltier was an ardent supporter of the federal FIRE Act grant program and had participated in a 30-day “road trip” with Carter in 2006 where the two gentlemen traveled the country talking with firefighters to learn success stories for the federal grant program.

He is survived by his wife Sue, his daughters Ann Marie Peltier and Melissa Irish, his son Lt. Jim Peltier of the Southborough Fire Department, and his grandchildren, Jason Irish, and Sarah, Steven, Shawn, and Seth Peltier.

You can read Peltier’s full obituary here. His death has also been covered in Firehouse and Fire Engineering magazines.

Jack Peltier was a great man. My wife, Rhonda, and I were very fortunate to have known him. Not only was Jack a great public servant and firefighter, but he was also a wonderful human being. I’ll never forget how kind Jack was to me two years ago when I was going through cancer treatment. Jack repeatedly boosted my spirits by visiting me and saying “You’ll get through this kid and I’ll be here for you.” Rest in peace my friend.