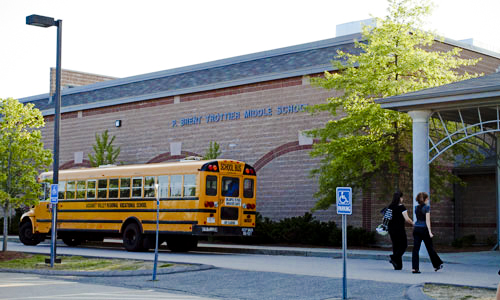 A student is believed to have sent harassing text messages to as many as 15 Trottier eight graders, and Southborough Police and school officials are investigating. The messages were sent using a service that keeps the sender anonymous, so the source has not been identified. Trottier Principal Keith Lavoie described the messages as “extremely hurtful.”

Lavoie declined to elaborate on the specific content of the messages Thursday, though he did say no one was threatened physically.

“It was hurtful enough to warrant a more complete investigation,” he said. “Our kids were scared. They were getting hurt by the language that was being used.”

Lavoie said officials believe the student used a phone application that allows one to create a different phone number to send the texts.

According to his email, the school is “working the legal route to obtain the records necessary to take the next steps.”

You can read more in this article by the Metrowest Daily News.

What do you think? Are you surprised to hear about this incident? Have your children ever experienced this type of harassment from their peers? As a parent how much oversight do you have into how your kids use their phones and other technology? Is the school doing the right thing by trying to identify who sent the texts? Share your thoughts in the comments.

This is so very sad and disturbing. I am not surprised to read this. In the past couple years I’ve heard a few people say that they have taken their children out of the local schools to find a less bullying option. The fact that the messages were not “physically” threatening is good – but no less disturbing. Verbal and emotional abuse, in my experience, is often worse in the long run than physical abuse. I know that the schools are trying hard to deal with this. Middle school especially, is such a difficult time for kids; they are hard on themselves and hard on each other. Seeing middle-schoolers walking in 30 degree weather with just a t-shirt on is evidence. Wearing a jacket could make them a target. They’d much rather be cold than humiliated by peers. Unfortunately there will always be bullying but steady discussion about it and its consequences can help.

I give the school officials credit for pursuing this matter. I hope they continue the investigation and obtain the records despite any legal hurdles.

Debbie – This is not a problem that can be solved by fleeing the rough and tumble public schools. I am aware of at least one stalking-by-text incident at Fay amongst children younger than those affected in this incident at Trottier. Here, the technology of “Text Now” app is thwarting efforts to identify sender.

I also give the school officials credit for pursuing the matter and especially for pursuing in a public manner. This brings it out into the forefront and will no doubt result in discussions at home among families. Talk to your kids about this stuff. Make sure they know it’s absolutely okay for them to come to you with worries, fears or questions.

Mr. Lavoie is the best thing that has happened to our Middle School system and when my 7th grader leaves in the morning in his shorts and t-shirt in the 30 degree weather I know that he is as safe as is humanly possible.
With all due respect –Debbie–I have family that has gone the private route (husband, brother etc.) and it is an option for me for my kids and I could not be more proud of our public system and the dedication of our teachers our Superintendent as well as community to constantly do the right thing for our children. And unless you are not cognizant to the ever changing times the private school system has the exact same technological issues plaguing their gated children and the drug issues they deal with are of the designer level. And for that matter I am not sure what you mean by a “less bullying option” do you mean one that is paid for? Middlers are Middlers you cannot change their developmental path by removing them from one environment and putting them into another

and by paid for i mean privately paid for.

Carrie!
(this is frustrating!) I was simply saying that thats what some people said they had done! -just stating a fact. period. You read too much into what I wrote. I totally agree and understand that private schools have the same issues and that middlers are middlers etc. I didn’t even mention private schools! (Those parents didn’t tell me what their alternate plan was) Please read what I wrote!

Why do 7th graders wear shorts and t-shirts in 30 degree weather? I’ve seen it but didn’t understand the comments.

I’m just spit balling here, but I think 7’th graders are wearing shorts and t-shirts in 30 degree weather because their parents allow it.

my son wears shorts and a t-shirt (with a hoodie) all winter long to school. He takes a very warm bus to school, the classrooms are all very warm. He’s fine and hardly ever get sick. In the scheme of the life of a teenage boy….it’s chump change. I’d rather discuss drugs, alcohol and respect for girls with him. We have good talks because he doesn’t feel like I try to control every minute part of his life.

Hate to break it to you, Ann but half the kids at NEARY have Cell Phones!

And they allow it because you have to pick your battles. I have a middle schooler who is still wearing shorts everyday. He says pants are too hot. I figure its not going to kill him and when he gets cold enough he will put long pants on. Mine does wear an underarmour sweatshirt with his shorts though. At least he’s smart enough not to just wear a T-shirt. And bullying has nothing to do with it. Maybe with some kids but definitely not all.

0
Minimom
Reply to  A resident

My kid never had a problem with bullying because of wearing shorts. Even in the lovely middle school years. I’m sorry if some kids experienced that though.

Who in G’s name is raising children who bully others for wearing a coat in the winter? There is a screw loose here. Teachers should be stepping in if they see kids who are not properly dressed for the weather. There is obviously a problem with both the bullier and the bullied in this case and it should be nipped in the bud.